Crooks, here is how to rob a bank 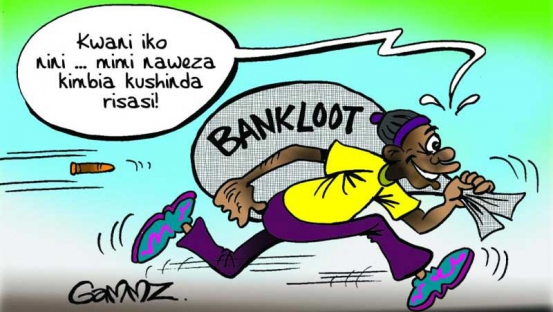 News coming out of Kenya, especially in Nairobi is shocking. Every now and then we hear that bank robbers have been arrested.

And it is those ruthlessly efficient guys of Flying Squad who are busting these criminals. The Flying Squad is not called that because they have wings. No.

It is because their dealings with robbers generally involve bullets flying into robbers’ skulls! I am tempted to say kudos, but then I have a feeling it is the amateur crooks who are doing things which their experienced colleagues disapprove of.

The way of the gun is so ingrained in our Flying Squad boys - they are always boys - that they have become folk heroes for the vigilante justice they dish out to troublesome criminals.

You notice nowadays robbers are pathetic at their work. Gone are the good old guns-n-robbers days when spectacular chases and daring daylight heists resulted in the bad guys getting away.

And in most cases, they always got away not just with money but also kidnapped a pretty girl whom they used as a shield in the event cops shot at them. In retirement, they used to write blockbusters, detailing how they used to do their thing — escapades with other people’s money — and, at times, wives!

Those were the good old days. You can’t compare them with the jokers masquerading as bank robbers these days. Would you? Take, for instance, a particularly bumbling pair of amateur crooks reported to have grabbed a whopping 30 million shillings from a woman in Nairobi.

Then, instead of hightailing it to some exotic location — Rwanda comes to mind, Burundi is not too bad either — with beautiful ladies as professional robbers are wont, these feckless and spineless pair decided to simply book themselves into luxurious resorts in Naivasha and Mombasa, where they then proceeded to blow all that cash away. Idiots. If you ask me.

Even worse, they didn’t do anything proper with the money, they just frittered it away on useless indulgences like pricey whiskey and fried chicken.

What’s the world coming to?! And so this is a bit of counsel for the young-and-upcoming robbers of tomorrow. When you decide to rob a bank, do not have luxury in mind. Robbing is exciting business that frequently ends in the death of the robbers, so there really is no good reason to make plans for the money.

But, to aid your chances of getting away with the loot, ensure you have a good getaway car and an excellent driver - the typical matatu driver should be a good option.

It is hilarious to see bank robbers stealing money, and then trying to stroll away as if they can walk faster than bullets can fly. Where did all the ambition go?

Most importantly, after nabbing the loot, do not book into some silly hotel to spend the money on stewed shrimp and such exotic nonsense. Head to Kigali, grab a Tutsi beauty, and disappear into the jungle of Eastern Congo with her.

Once there, pen a novel about your exploits, smuggle a little gold, and generally stay away from Kenya for a decade or two - when you come back to Nairobi, the Flying Squad will have forgotten about you.

You can then live a quiet, safe life in a wealthy suburb, and even invest on the Stock Market — where you will be lauded as a pillar of the community.