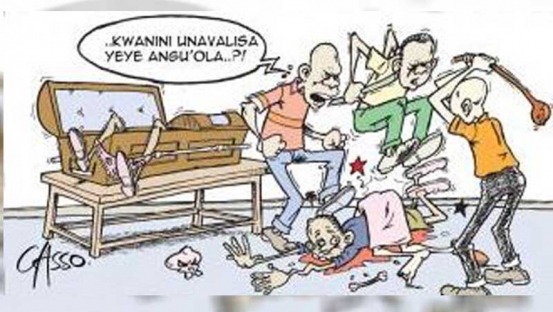 There was drama at a funeral in Misori Village in Bondo, Siaya County, last weekend after female relatives to a dead woman were clobbered silly, chased away and denied an opportunity to give the deceased their last respects.

This was after they flaunted a custom the clan holds very dear. The women were busted secretly dressing the deceased’s body an ang’uola (underwear) out of malice so as to deny her husband an alleged customary opportunity to dream of making love to her.

According to an elderly villager, the women formerly had a relationship with the dead woman’s husband. And dressing her in underwear was a punitive measure, aimed at ruining chances of the widower experiencing the alleged ‘sweet dream’. It was also a conspiracy to frustrate his efforts to remarry.

“The deceased's family alleged that the man mistreated their daughter, and therefore wanted to punish him for that,” she said, adding: “At the mortuary, when the dead woman’s husband’s people went to collect her remains, they dressed her up and removed her underpants.

But upon arriving home, the deceased kin locked themselves in the bedroom for some minutes with the body. They claimed they wanted to view it and perform some private rituals. They then put on it   underpants to spell doom on the widower’s chances of remarrying.”

Apparently, hell broke loose after a suspicious sister to the widower, out of curiosity, decided to venture into the room after she realised the deceased’s mother and two sisters had overstayed in the room in the name of “viewing the body”.

Upon bursting into the room, the widower’s sister got a rude shock; the deceased’s mother and two sisters had opened the casket, spread the dead body on a bed and were struggling to put underwear on it.

She raised the alarm, attracting the attention of a multitude of mourners who were outside eulogizing the deceased. They made a beeline for the bedroom where they unleashed terror on the three women.

They descended on them, with kicks and blows flying from all directions with reckless abandon. The angry villagers frogmarched the three women out of the compound with others taunting and admonishing them.

Apparently, among certain clans among the Luo community prohibit dead women from being buried while wearing underwear. This is done with the intention of making it possible for the widower to easily dream about her.

Mark you, this was not just an ordinary dream, but a dream about making love to her! It was believed if you buried a woman in one, it would not be possible for the widower to have the all-important dream without which, remarrying was taboo.