How we met: Joseph and Wagikuyu Hellon 15 years later 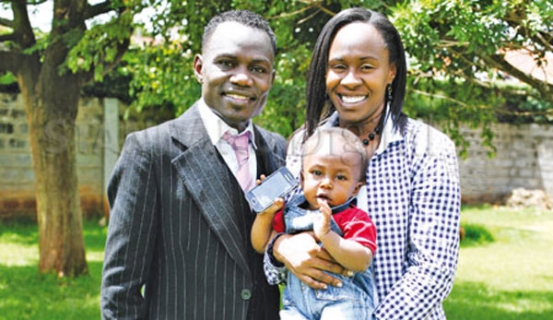 Hellon was 17 years old and had just finished high school at Starehe Boys’ Centre when he met Kuyu in 1995. He was teaching music at the Reel Music School in Westlands as he waited for his exam results.

Kuyu, also 17, was a student in her final year at State House Girls who used to learn how to play the piano at Reel Music School on weekends. “She was beautiful, with her smile and long hair,” says Hellon, “but I did not really speak to her until we had a school concert at the end of the year.” At the end of that show, she complimented him on his dance performance. “I took that as my cue. We talked and I asked her if she was coming the next year and she said she was,” says Hellon.

In January 1996, she had graduated from high school and came back to Reel eager to be a musician, and with a new interest in the flute. When she asked if Hellon could teach her, he was more than happy to oblige. Their teacher-student relationship blossomed into what they both describe as a beautiful friendship. “I was very impressed at how he really believed in me and wanted the best for me,” says Kuyu.

“He became like a mentor and he was the person I wanted to see every day.” They could have acknowledged from the start that it was also going to blossom into a romantic relationship, but they denied it vehemently when their friends brought it up. “We thought people who got married had to have a certain “thing” and we did not know what that thing was. We were just so close and so open with each other that we thought that when we each found someone to marry, the other person would be the first to know and decide if they approved of them,” says Hellon.

But everyone else was clued in because Hellon showered Kuyu with gifts, among them the flute he gave her at the beginning of their friendship when he learned that she had saved up Sh1,000 to buy one, unaware that at the time, flutes cost between Sh70,000 to Sh150,000. Such grand gestures combined with the fact that they spent inordinate amounts of time together, were all signs of the times.

By the end of 1996, they were more or less a couple. But then Kuyu had to go to Daystar University as a boarding student and spending time together was no longer as easy as it had been. In August 1998, Ron Kenoly came to perform in Kenya and Hellon was playing the saxophone for him. Kuyu was part of the Daystar singing group called ‘Sing Africa’ and they were curtain-raising for Kenoly. After all the performances at the concert, Hellon told her he wanted to introduce her to his girlfriend. Her face fell.

She asked where the girlfriend was. He said that she was not around but that he had carried a picture of her. “I reached into my pocket and took out the picture. It was a picture of Kuyu.”

From then on, he would spend so much time at Daystar University that people thought he was a student there (he was actually studying at the Royal College of Music in England through correspondence).They would often go out for meals and of course there was always Hellon’s legendary gift-giving. Kuyu kept every gift he gave her. She still has the white and yellow gold birthday ring that he bought her on her 19th birthday.

Strangely enough, Hellon never officially proposed to Kuyu. “Our relationship was so intense that every single day was like the proposal day,” says Hellon, to which Kuyu readily agrees. Unfortunately, they lost some of the money Hellon had been saving for a dream wedding. They were devastated but made do with what they had. Six years after meeting, the then 24-year-olds tied the knot on December 15, 2001. They wanted a fairy tale more than anything else. Fifteen years and two children later, they are living that dream.

“Our marriage has been a journey of joy and it keeps getting better,” says Hellon.