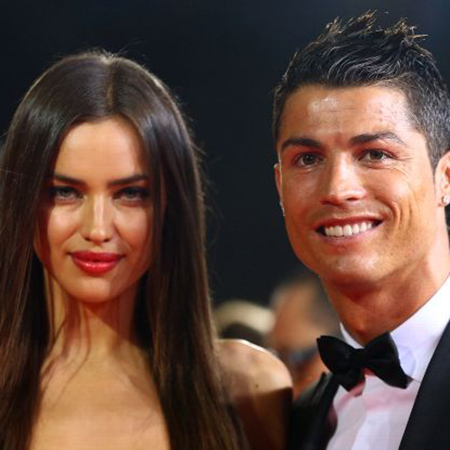 Cristiano Ronaldo with ex Irina Shayk during a past event. Photo Credit: Espnfc.com

Cristiano Ronaldo has wished Irina Shayk "the greatest happiness" following their split after five years together.

The 29-year-old Real Madrid star has insisted that the decision to break up was mutual and insists there are no hard feelings between him and the Sports Illustrated model.

The Portuguese star said: "After dating for five years, my relationship with Irina Shayk has come to an end. We believed it would be best for both of us to take this step now."

He also suggested he is still on good terms with the brunette beauty.

In the written statement, he added: "I wish Irina the greatest happiness."

It was reported that the couple broke up over the Christmas period, with the striker already being linked to Spanish TV presenter Lucia Villalon.

Last week, it was claimed that Ronaldo dumped Irina, 29, because she refused to attend a 60th birthday party he was organising for his mother Dolores.

However, a spokesperson for the model-and-actress previously refuted the claims, saying: "She has been very close to his family throughout their relationship.

"Any negative rumours about Irina's and Ronaldo's family are completely false and have not been a factor in the cause of the split. Irina has no comments at the moment."

Yesterday, it was reported that gorgeous Spanish sports reporter Lucia Villalon is rumoured to be dating Cristiano Ronaldo after the pair were pictured celebrating the striker’s third Ballon d’Or win on their way back from Zurich.

Speculation Irina and Cristiano’s near-five year relationship was over first surfaced after Irina, 29, missed the glitzy ceremony last week following her decision to unfollow her ex on Twitter.

Pretty brunette Lucia Villalon, who was in Zurich, started tongues wagging after posting a selfie on Twitter of her and Ronaldo holding his Ballon d'Or on the plane to Madrid.

There was Twitter silence from both Cristiano and the 26-year-old reporter for Real Madrid's official club channel Real Madrid TV, this afternoon.

A Real Madrid TV spokesman said: “We speak about sport and not romances on this channel.”

Irina’s agent confirmed at the weekend her relationship with Ronaldo was over.

It was reported last week Ronaldo, 29, had dumped his model girlfriend over Christmas after she refused to attend a 60th birthday party he was organising in his native Madeira for his beloved mum Dolores.

The footballer is said to have spent New Years Eve alone with his son Ronaldo Jr after the couple’s trip to Dubai ended with a massive argument.

But Shayk’s agent insisted after confirming the break-up: “She has been very close to his family throughout their relationship“

"Any negative rumours about Irina’s and Ronaldo’s family are completely false and have not been a factor in the cause of the split. Irina has no comments at the moment."

Real Madrid goalie Iker Casillas set a precedent at the Spanish club for dating attractive TV reporters by honing in on stunning brunette Sara Carboneras. The pair, who have been dating since 2009, now have a one-year-old son called Martin.

During the 2010 FIFA World Cup it was claimed Carbonero, who works for Spanish TV channel Telecinco, caused an unexpected victory for Switzerland during its match against Spain by distracting Casillas.

The claims were later rubbished and the couple’s famously sealed Spain’s subsequent World Cup win by kissing at the end of a live interview. Real Madrid defender Sergio Ramos’s girlfriend Pilar Rubio is also a well-known TV presenter in Spain.

Cristiano fans who attacked Irina after it was revealed last week she and the footballer were history, gave Lucia their blessing today.