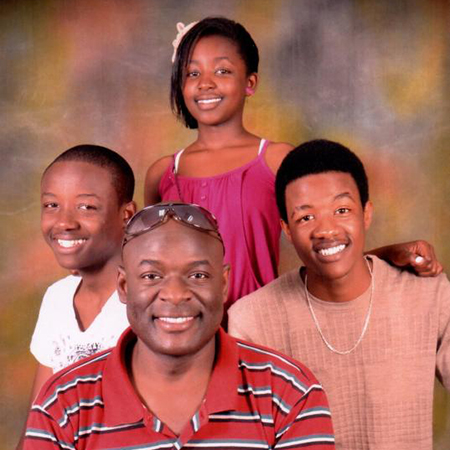 Tom Mboya, a seasoned journalist and news anchor has received worldwide accolades, including the prestigious CNN African Journalist of the Year Award in 2012. He is the proud father of  three - two sons (a university student and a form four candidate) and a daughter who is in class seven.

But he has had his fair share of low and trying moments. Just four years ago, he was in and out of hospital struggling with alcoholism. The single father talks to CATE MUKEI about his family, separation from his wife and how a near-death experience became his turning point.

Seven years ago you suffered pancreatitis and you were in a coma for a month. How did this happen?

I lived on the fast lane and drunk heavily. People expected a lot from me as a star news anchor. I used to drink a lot to hide my frustrations. Alcohol also offered a temporary relief from the struggles of being a single father. I did not realise it was taking such a toll on my professional and personal life. One day, I collapsed in the house. My children called for help and that’s how I ended up in hospital where I was put on morphine.

Where was the mother of your children all this time?

We separated when the children were very young. In fact, my last born daughter was hardly a year old. I have been a single father for many years.

As you lay on your hospital bed, what went through your mind?

I did not care what my body was going through as I was about the welfare of my children. Their spirit and positive attitude is what kept me going. I could feel their fear and imagine them agonising whether I was going to pull through. We still talk about that experience sometimes. I want them to understand that choices have consequences and that your lifestyle can make or break you.

How did you manage to get back on your feet?

Things had to change. Being hospitalised was the lowest moment in my life. I had to quit alcohol and smoking. Luckily, I landed another job at Citizen TV and I have never looked back.

Tell us a bit about your separation.

Every house has its fair share of ups and downs. We were young and did not fully understand what marriage entails. Those are some of the mistakes you make when you get into a relationship while young. It became difficult to reconcile our differences and we parted ways.

How is life as a single father?

When we parted ways, I had just joined the media as a business reporter and anchor. My last born daughter was very young and I had to do nappies. I was juggling work, school runs and managing the household. The future of my three lovely children was literally in my hands. I sat down with the kids and we had an open conversation. I explained to them about the separation, what it meant and why. I made it very clear that they had nothing to do with it and that mummy and daddy were going through a tough phase.  I am glad I opened up early. We now have this special bond and I am not only their father, but their best friend.

Has it changed you?

I can chew gum and climb the staircase without biting my tongue! Being a single father has taught me how to multitask. I was anxious in the beginning, but with time, I got used to it. The attitude I have developed has kept me going. For the first time, I realised the value of interacting with my children. I have no regrets!

Being an African man, has there not been pressure for you to remarry?

Yes! People advised me to get married, but I did not want to rush into another relationship. I am married to my children. Our bond is so strong that at one time, when tried talking them into living with their mother, they refused. This is because they are so used to me. I think fathers who do not spend quality time with their kids miss out on a lot. Being a single father has been a pleasure.

A woman named Elsie Achieng recently accused you of neglecting a child you got with her. How true is this?

At some point in my life, I thought I needed a partner, but things did not work out unfortunately. I prefer to reserve my comments for now since this case is in court.

How did your children react to the news?

It was shocking because we all learnt about it from the newspapers. They felt betrayed by someone who they had considered a potential mother. They had respected and interacted with her and therefore could not understand the motive behind it, given my sensitive position in the society?