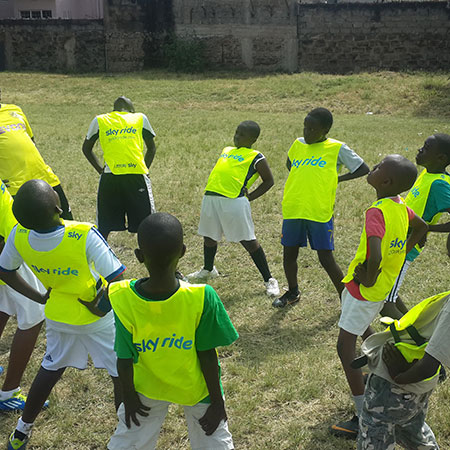 “This is a step in the right direction and we call upon other former players to help in nurturing young talents,” Oguda said.

Under the flagship of Ken Oliech Foundation, Oliech seeks to tap into the vast talent that he says go to waste due to lack of adequate foundation and training on football basics.

“I was lucky to have had elder brothers who took me through the ropes of football development. However, it is sad to note that there are good boys and girls who never achieve their dreams and goals simply because there was no one to hold their hands,” Oliech told The Nairobian.

The brother to Harambee Stars Ace Dennis ‘the Menace’ Oliech, the former Gor captain, already has an up and running talent academy based in Kibera’s Woodley grounds. Dubbed Young Stars, the academy has 40 slum kids

“We coach them every weekend during the school days and daily when schools are closed,” explains Daniel Matengo, the academy’s head coach.

Matengo, formerly of Gor Mahia says that even though he didn’t get to play in the top flight European football he would like to impact positively on the life of the upcoming footballers so that one day, one of the young stars will get a chance to fulfill his dream.

Now a manager of Mama Oliech Restaurant at Chaka Place in Hurlingham Nairobi, Oliech will this Saturday, March 1, 2014 launch the first academy out of Kibera.

“We have hired Strathmore University grounds in Makadara where we seek to expand the coaching of young talents every weekend. The idea is to open  another centre was brought by the need to reach out to children who live along the environs of Lang’ata, Upper hill and both South B and C,”

Oliech says that plans are in place to expand to Buru Buru estate in Eastlands too.

Premium
Eight life lessons from eight interviews
Features
By Jacqueline Mahugu
8h ago
Here is the Kalasha Awards winners' list
African News
By Standard Entertainment
10h ago
Yvonne Adhiambo: My loyalty's only to the story
Features
By Gloriah Amondi
18h ago
100 years: A social club for all seasons
Showbiz
By Kirsten Kanja
19h ago
How trends have influenced Kenyan music
Features
By Muhunyo Maina
19h ago
.