By Kevin Tunoi | 3 years ago 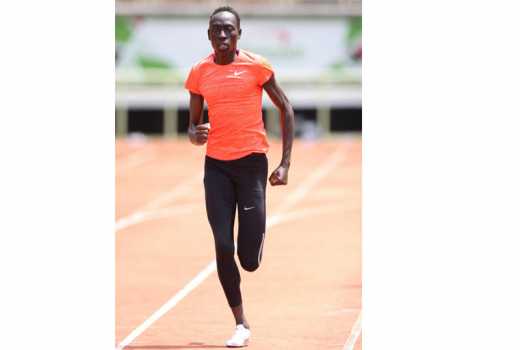 A Nairobi businessman is losing sleep over the loss of his girlfriend to 800m Olympian Margaret Wambui Nyairera, whom he accuses of seducing and snatching his lover.

Steve Chemogos is at pains to keep the girlfriend, Wangechi Mwangi, who has seemingly been swept off her feet by Nyairera, now part of the Kenyan team for the Commonwealth Games in Gold Coast, Australia.

Chemogos told The Nairobian that he met Wangechi in 2017, but the female athlete is giving him competition for her affection.

But Nyairera came into the picture, referring to Wangechi as ‘darling,’ in online posts. Wangechi responded in one post: “... All the best sweetheart... success is all we want... I know you will do it darling... Much love.”

Nyairera commented on the post thus: “Thanks darling I do appreciate you.” The post was apparently to wish the athlete success in the Commonwealth Games, and these messages are denying Chemogos sleep.

“I realised recently that they were becoming very close. I knew it would break my heart because I love Wangechi with all my being. I confronted Nyairera who did not deny the relationship, but instead claimed that I should have known,” explains Chemogos, a small time businessman who hails from Nandi County.

Chemogos is no longer at ease “because I know that when Nyairera comes back, she might displace me because she is richer. I know she is planning to use her financial muscle to destroy my relationship which I have built for almost a year now. For now I will bask in the glory of being the king of this kingdom.”

In a series of screenshots shared with The Nairobian, the man pleads with Nyairera not to interfere with their relationship. The back and forth has Nyairera stating that she has a sweeter d**k than Chemogos.

Wangechi, who rocks natural hair, declared her love for the athlete on Facebook with love emojis. She posted two photos of her and Nyairera at the airport clad in a branded sweater with Nyairera sporting the Kenyan team colours.

The two women have in the past uploaded their photos on social media getting cosy on different occasions.

Wangechi in different photos is clad in IAAF Diamond League and branded T-shirts. One of her Facebook posts is captioned, Amore Mio (Italian for ‘My Love’).

Nyairera warned Chemogos saying he’s wasting his time and resources:  “Wewe ng’ang’ana tu maybe atakukufia but she is mine,” states a post by Nyairera. When we contacted her, Wangechi retorted: “Is that your work, to ask people about their relationships?” 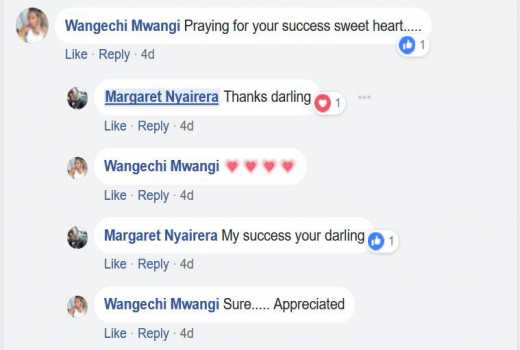