Mahmoud Abbas aka ‘Kenya One’ has been touted as the best goalkeeper ever to don the national colours.

It is however interesting that whenever discussions are held about some of the best shot-stoppers, the name of David ‘Kamoga’ Ochieng is never mentioned.

The common perception is that Abbas is Kenya’s best goalkeeper ever. I thought so too until my friend Abirry Wuoche Gweno enlightened me.

Abirry believes that Ochieng was far much better than Abbas — who was simply a flamboyant loud mouth, something that drew fans to him.

A show-stopper, Abbas would do anything to flip the fans’ attention to him through his dressing mannerism and comical antics.  He could ‘whip’ defenders into position by shouting and roughing  them up.  Abbas who hailed from the Coast used his Kiswahili sanifu to intimidate defenders drafted from rural clubs. Woe unto ‘deaf’ defenders who were derided for 90 minutes!

Abbas was basically the second coach on the pitch.

Referees and other officials were not spared either.

The media loved him and in the process built up his antics on and off the pitch. Boy! didn’t he succeed? 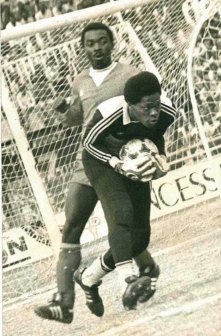 Under the tutelage of Harambee Stars coach Marshall Mulwa, Abbas won three Cecafa trophies. As a shot-stopper, Abbas was famously thrust into the limelight when he stopped penalties during the 1982 Cecafa final pitting Kenya against Uganda in Kampala.

He also did a treble with AFC Leopards in 1980, 19a81 and 1982, but missed out on any continental trophy for club and country.  A former staffer at Kenya Airways, Abbas is now retired and was honoured during the last Mashujaa Day.

So, did that make him better than David ‘Kamanga’ Ochieng?

David Ochieng joined Gor Mahia FC from Stima FC, a small provincial club, during the tenure of coach Len Julians who was  revitalising the club after the 1982 purge.

The soft-spoken custodian was nicknamed ‘Kamoga’ by K’Ogalo fans after foiling several attempts by a Ugandan defender, David Kamoga. He became an instant hit at Gor Mahia. His accomplishments include winning the league with Gor in 1984 and 1985; winning Cecafa in 1985 the continental Mandela Cup in 1987 — the year Kenya lost 1-0 to Egypt in the soccer finals in the 4th All Africa Games at Kasarani with Ochieng as goalie and Reinhardt Fabisch as coach.

In 1988, under Chris Makokha and with Washington Muhanji, he was Harambee Stars’ custodian in Morocco.

The typical example of the kusema na kutenda or the tenda wema nenda zako goalkeeper David Ochieng - still an employee of the power distributor Kengen - did his bit on the pitch and left. Even after retirement, he’s rarely in the limelight.

But David Ochieng definitely has more silverware in his cabinet than Mahmoud Abbas!