By Nairobian reporter
1 month ago

While there are women who fall head over heels for the tall, dark and hunky dude with a well-paying job or lucrative business, there are lasses who are turned on by crooks: bank robbers, carjackers, con men, pickpockets, you name it.

Well, love and crime have always been intertwined since Bonnie and Clyde, and even here in Kenya, we’ve had our fair share of women who love criminals. And it even has a psychological term, ‘hybristophilia,’ which describes people who lust after those with criminal records.

Remember the Kayole chicks in Nairobi who made the headlines not so long ago? One was nicknamed ‘Cleah Adi Vybz,’ and described as ‘Kenya’s sexiest gangster.’ She met her premature death under a hail of bullets on May 9, 2017. Cleah, whose real name was Clare Mwaniki, engaged in a shootout with cops during a robbery.

Police said she was still clutching her Beretta pistol, which still had six rounds of ammunition when she died. Cleah was the wife of a well-known robbery suspect, commonly known as ‘Mwanii.’ About two weeks later, Cleah’s friend, ‘Marsha Minaj,’ who also dated a well-known gangster in Kayole, was gunned down together with a male colleague in the Patanisho area of Kayole in Nairobi.

Before these two girls, Kenya was mesmerised by wanted gangsters Wacucu (Anthony Ngugi Kanagi), Wanugu (Gerald Wambugu Munyeria) and Rasta (Bernard Matheri Thuo), who engaged police in hide and seek games for two years to 1997, when the Police Commish, Shadrack Kiruki, offered Sh100,000 as reward for anybody with information that could lead to the arrest of ‘Kenya’s Most Wanted Criminals.’

They were wanted for a spate of bank robberies, murders and carjackings. Wacucu was killed in Rongai in the outskirts of Nairobi, while Wanugu escaped courtesy of a bulletproof vest, but was later cornered in Kabatini, Nakuru County, and killed in 1996. Wanugu was in the company of his girlfriend whom he used as a human shield. Since he was among Kenya’s most wanted and was all over the news, why did the woman stick with Wanugu?

Rasta, who was said to have gifted his new girlfriend an AK47 assault rifle for the simple reason that chocolate and flowers were too common, was the last to be fried by bullets from Flying Squad officers in Kiria-ini, Murang’a County in 1997. Rasta had two wives who loved him dearly.

Love and crime are not confined to any nationality, if the case of Indian Vicky Goswami is anything to go by. Goswami was arrested by American Drug Enforcement Agency officers in Mombasa alongside the Akasha brothers over drug trafficking allegations in May 2016. Goswami had wooed and married Bollywood actress Mamta Kulkarni.

Almost 20 years earlier, Goswami had been jailed for 15 years, but Mamta ensured the jail term was reduced to 10 years, after which the couple relocated to Kenya where they were both arrested, but Mamta was later released.

It is not just ghetto and rural girls who can’t resist criminals. Take Trizah Karimi, a 32-year-old bank accountant who told The Nairobian that, “I dated a man for over three years, only to get a visit from police officers claiming that I was his accomplice in an attempted bank robbery.” Trizah had met Bosco, the man of her dreams at a house party in Runda, Nairobi and “when I saw him, I thought he was really cute and we locked eyes a couple of times.”

The thunderbolt struck when Bosco approached Trizah and we “clicked almost immediately at the party and spoke all night long, oblivious to what was going on around us. Before we knew it, we were the only ones left at the party.” Trizah loved Bosco. Any woman would die for his height and well-built arms.

“He would spoil me with cash and gifts,” she told The Nairobian. Trizah noticed that Bosco never had a day job, yet he was never broke. He often brushed off any questions regarding his source of income, claiming that he was spending his family’s income,” Trizah said, adding that even though she enjoyed her gold mine, she was suspicious of him.

“I didn’t want to lose the excitement and mystery about him,” she explains. Then Bosco would go missing for days without a word. “Two or three months of silence would be compensated with flowers, clothes and money,” she said. Trizah would never hear from Bosco but would receive regular allowance without fail.

“One day, while Bosco was out of town, I was stopped by cops, dragged into their vehicle and taken to an undisclosed location. The officers demanded to know the whereabouts of Bosco, our next mission and our accomplices,” she narrated. Even though Trizah learned that Bosco was a wanted man whose next mission was to break into her place of work, she felt more attracted to him and quit her job to be a stay-at-home spouse.

Bosco was arrested but later released on bail. 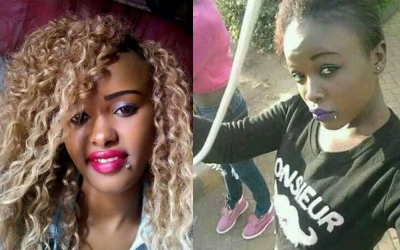