By Lesley Caesar
2 years ago

After a couple months of getting used to Harvard life, pictures of Obama with a mystery man began to surface, which begs the question. Just who is this guy?

Dating the former president's daughter doesn't exactly create the best opportunity for anonymity but the couple seems to still be going strong regardless. Here's everything you should know about Farquharson.

It's no secret that most Americans love English accents. Obama may be part of the majority as her rumored love interest just so happens to be British. The Telegraph reported that Farquharson grew up across the pond and attended a private boarding school where he was a member of the chemistry club.

He was also deemed "Head of School" during the 2015 to 2016 school year. Not only was Farquharson a bit of a brain, he was also a jock as he played both rugby and golf.

Sure, Farquharson has the accent, but does he have the look? Of course! Vanity Fair claims that he and Obama both have "mastered New York City street style."

Farquharson was photographed in a puffy blue jacket but all eyes were on his sunglasses — his tiny sunglasses. A popular trend in the '90s is being revitalized by the likes of Selena Gomez, the Kardashian and Jenner clan, Rihanna, and now, of course, Farquharson.

He goes to Harvard

Whether or not you think of Farquharson as a bad influence, there's no denying that he attends a good school. Like Obama, Farquharson is a student at Harvard University, one of only eight Ivy League schools.

According to The Telegraph, this is likely where the lovebirds first met. While it is not known what Obama is studying, it seems her interests center around the arts. Farquharson, on the other hand, may be following in his father Charles' footsteps. Charles Farquharson obtained a law degree from Cambridge University and is now a chief executive at an investment firm in London.

They further reported that Farquharson followed quite a few banking-related accounts on Twitter so, if nothing else, the interest is there.

According to Harvard University's site, tuition begins at $43,280 per school year. Add room and board, and you're up to around $63,000. While the Ivy League school accepts financial aid, Harvard definitely seems to favor the rich. Farquharson is no exception.

The prestigious boarding school, Rugby School, that he attended in England costs £11,584 ($14,339) per term, reported The Telegraph. Not exactly chump change, to be sure. The Telegraph also reported that Farquharson's childhood home is a £1.6 million ($2.27 million) house.

With a son in Harvard, an executive father, and a mom who is both an accountant and a lay person for London's Upper Tribunal, the Farquharson family seems to be doing quite well financially.

He's not a Trump supporter

Although Farquharson was raised in the United Kingdom, he is now a resident of New York and has his opinions on American politics. As Obama's supposed suitor, you'd have to assume he's a Democrat, right? Well, no matter his politic affiliations, he's definitely not a fan of Donald Trump.

According to The Telegraph, Farquharson shared his criticism of President Trump via social media.

He deleted all of his social media accounts

It seems there is always a cost associated with dating a public figure. Page Six reported that since he began dating Obama, Farquharson deleted his social media. While you may be disappointed to learn that all of his social media accounts — aside from very few pictures on Facebook — have been wiped out, it is understandable given the scrutiny that comes with high-profile relationships.

What would President Obama think?

While President Obama hasn't commented specifically on their relationship, he has discussed his thoughts about his daughters growing up and dating. When asked in a telephone interview by ABC News, "What are you going to do when the girls start dating?" President Obama responded, "Oh… that happened. You know, the truth is I'm pretty relaxed about it."

Obama continued, "For two reasons, one is Michelle… She's such a great example of how she carries herself, her self-esteem, not depending on boys to validate how you look or, you know, not letting yourself be judged by anything other than your character and intelligence.

Shortly before Thanksgiving in 2017, TMZ released a video of Obama briefly locking lips with someone while tailgating her very first Harvard-Yale football game. 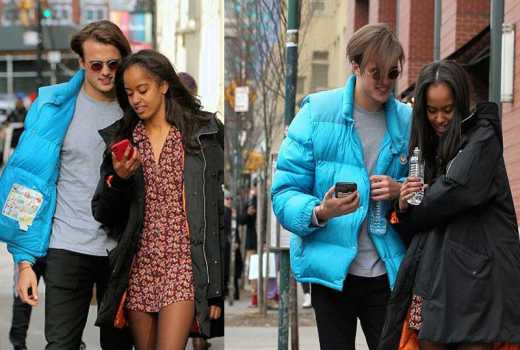