Secret handshakes to strange rituals:Inside the mysterious world of the Freemasons 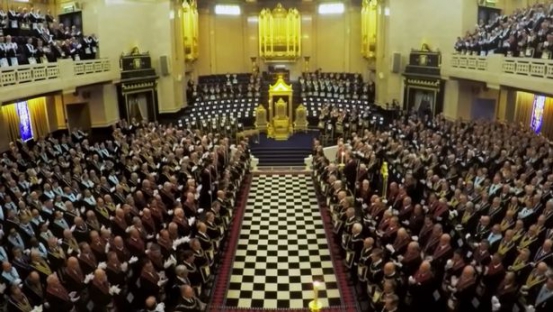 They may be known to have to bare the odd breast and roll a trouser leg up and perform a strange handshake - but secrecy surrounds the inner machinations of the Freemasons.

In their 300th year they still only admit men - and many believe they are influencing the annals of power and pulling all the strings of world politics from behind the scenes.

They have been rumoured to include members of the Royal Family and high profile names like Winston Churchill - as well as nefarious types like 'Jack The Ripper'.

But finally the secretive organisation is working hard to change its image - beginning with a Sky 1 documentary series called Inside The Freemasons which starts on Monday April 17.

It aims to lift the lid on what it's like being a member of the Masons - whose unusual traditions stretch back to Medieval times - in one of the UK's thousands of known lodges.

The Hertfordshire Mercury reports that in its county there are 5,300 Masons organised into 190 masonic lodges alone - complete with temples where the group's mysterious rituals take place.

It reports that despite everything you may have heard, the truth is probably a lot more mundane than you can imagine.

James Harrison is one of five assistant grand masters for the Hertfordshire region and he told the paper that in reality, Freemasonry is a lot like most other community organisations.

"Most lodges meet three or four times a year although each is different," he said.

"Meetings are in two parts. There's sort of the business part of it which is lots of administration, taking of minutes, charity donations and that sort of things.

"Then there's the ceremonial part which perhaps people have heard more about. We have certain rituals that go back hundreds of years.

"When you join you have to go through three stages which help you develop your understanding of the organisation.

"You could describe them as morality plays but they are symbolic representations of what we consider is important."

But the truth about joining the organisation is disappointingly simple - you just apply on their website.

"Although we are often described as being secret, we aren't. We have a website which isn't terribly secretive.

"A number of new members come through the website although friends of members can join.

"We don't go around trying to drum up business but we are open about our membership.

"If someone is interested we will explain what it's about and then they would be interviewed by a committee in an individual lodge."

He added: "There are a few requirements. You have to be a man of 21 years or more.

"Although there are certain dispensations which allow 18-year-olds to join but that's by special permission.

"You cannot have any criminal convictions and the only other thing is the person must profess a belief in a supreme being.

"It's not a religion and we don't require any specific religious belief, just that you believe in something or someone."

Conspiracy theorists like to imagine groups of Masons meeting up and plotting to influence politics to their advantage, but according to Mr Harrison that is something members expressly avoid.

"That's absolutely not the case," he said.

"Everybody coming in does it for their own reasons and different people get different things out of it.

"It's very important to us that we support each other from a point of view of fraternal connection, we consider ourselves to be brothers and we support as a family would.

"We specifically exclude any discussion of politics or religion from our meetings.

"We certainly don't support or allow anyone to try and get any financial benefits from membership.

"I know it's something people think about but all I can say is I have never been aware of that situation."

He added: "I think there's a great mythology that has grown up around Freemasonry.

"Yes we have things that we keep private and sometimes people look at that and think it's shady and we won't talk about what we are doing.

"If you go back to the early days of Freemasonry, it was much more open and the local Masons were more a part of the community.

"I think during the war, particularly in Europe, Freemasons were persecuted by the Nazis and I think there was a reaction and people perhaps started to be a bit more cautious in talking about it.

"When we don't talk about it people will come up with their own ideas. One of the things we are now trying to do is be a bit more open."