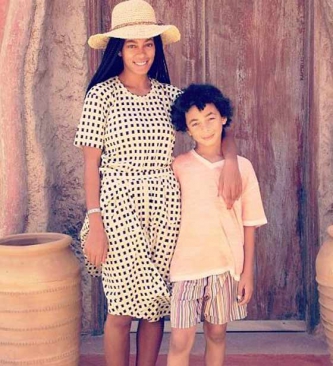 The singer posted a lengthy response defending the 11-year-old.

Solange Knowles isn’t going to let anyone criticise her family.

Beyonce’s younger sister fired back at an Instagram user who rudely called her 11-year-old son “ugly” under one of her posts.

The singer shared a snap of son Julez, who she has with ex-husband Daniel Smith, dressed up for Halloween in a red Adidas tracksuit and a big pair of gold headphones.

“Young cool J too cool for ghost and goblins (sic),” she wrote next to it.

Underneath the picture, someone later said: “So cute but at the same time he ugly (sic)."

Seeing the comment, Solange later shot back with some wise words.

“Just as I thought it was safe to share pictures again, a young’n like you decides to use her time to spread ugliness," she wrote.

“I don’t fault you, I can only imagine why you would feel the need to say such things, but thanks again for being a reminder that out of all the love and wonderful energy shared, that when I open up a space for an innocent beautiful being like my boy to be criticized and judged, that I WILL most likely respond, and that he receives enough love and celebration at home that it’s just not worth it to go down this road.”

She added: “I hope that this really resonates with you and you make better decisions in the future towards how you use your words towards innocent children. And @ro.rxd get ya friend because this could have truly gone south if I was in the wrong mood (sic).”