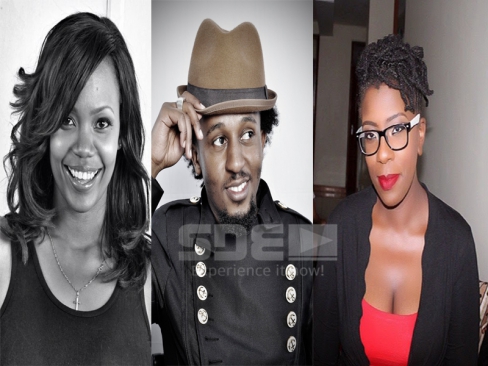 It was a sad day for Nation FM’s radio presenter Sanaipei Tande, after she received news that she was sacked without her knowledge.

The ‘Mfalme Wa Mapenzi’ singer bid her loyal listeners goodbye via a tweet saying, “Dear loyal listeners, 2day was my last day on @NationFMKe..as I just learned! No hard feelings, I will miss U all.”

Her colleagues and radio hosts Anto Neosoul and Ciru Muriuki,  also tweeted their farewell to fans.

“Guys today was my last day on @NationFMKe. Thank you all so much for your support in my time there. See you on the flip!

Fans expressed their disappointment to the news with some of them saying,

‏@Issysky:  I do not know what is happening and I don't like it at all #teaminsomnia shall never be the same without them!!!

Viola Davis' Grammy win for audiobook makes her an EGOT
Showbiz
By AP
8h ago
Tems writes her name in Grammy history as first Nigerian female to win
News
By Fay Ngina
11h ago
Exploring Amboseli on a hot air balloon
Lifestyle
By Jayne Rose Gacheri
14h ago
List of Grammy winners in top categories
News
By AP
16h ago
Beyonce breaks Grammys record, is now most-decorated artist
News
By AP
16h ago
.