The art of clout chasing 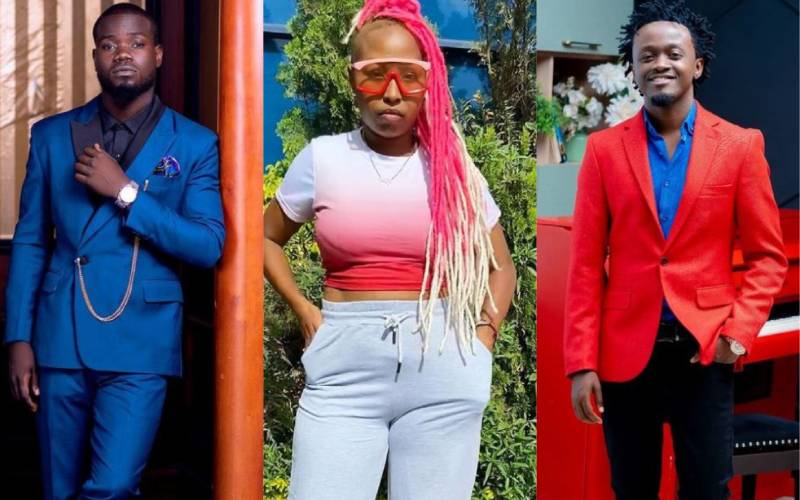 Rapper Offset featured his wife Cardi B on the hit rap track Clout in 2019.

Together, the beloved hip-hop couple chanted the lyrics “they do anything for clout” as they told off haters and asked them to “watch their mouths” and “stay in their place.”

The trendy song made use of the now popular phrase, clout chasing, which is used to refer to a form of advanced attention-seeking and extreme thirst for fame.

Clout chasing is a phenomenon Kenyans know all too well. It’s been taken too far by local stars that it’s hard to tell who’s real and who’s not.

It may have been all fun and games initially but now the joke has become old, the act repetitive, and Kenyans are having none of it.

The most recent attention-seeking gimmick locally was by singer Vivian Kenya who pulled a fast one on us to promote her new song with Sosuun.

The two had a heated social media exchange out of the blues and fans were suspicious the whole time.

“It’s such a shame gift kama ya huyu dem ikidisappear nkt. Sometimes women give up on their gifts too quickly. Kuzaa ni poa ukitamani kama mwanamke. I understand coz im a mum but sasa gift yako unaachia nani?” Vivian wrote on Instagram.

Fans were seemingly irritated and could see right through it.

“I’m tired of the clout chasing in Kenya. I think it could be better if you brought it another way coz I think almost every Kenyan is literally tired also,” wrote an Instagram user going by Ann Joy.

“Hii ngoma inatoka lini,” wrote Madubi, already guessing that there was a collaboration in the works.

And sure enough, after a few more jabs via the app, the two announced the release of their song, Chachisha.

Prior to this, a lot had been said about clout chasing and whether it was working to the disadvantage of artistes.

Everyone was already familiar with the antics of comedian Eric Omondi, who went from staging relationships and pregnancies to having exchanges with other famous personalities on social media.

Although he was constantly called out for attention-seeking and misleading his fans, it seemed to work- he was always being talked about.

He has been known to throw jabs through Instagram captions and clips, and using the attention that follows to promote his music.

Last year, Willy Paul and the gospel artiste Size 8 had tough words for each other on Instagram, just to attract attention to their song Lenga.

“Size 8, you blocked me on Instagram just like that. Four years now. Is that what God’s people do? Surely ni gospel gani hii? Ata simu zangu hushiki. Thought tulikuwa brother and sister. Anyway thanks a lot woman of God. Remember no one is perfect,” Will Paul wrote.

We cannot forget the Bahatis who upset their large social media fanbase when they pretended to break up in 2020.

Diana Marua, Bahati’s wife, deleted all his photos from her page, and later uploaded a ‘black rose’ post signifying that their relationship was over.

“Sometimes you have to unfollow people in real life. God bless my next chapter,” Diana wrote.

Days later, Bahati released the track Mtaachana Tu, and it was clear that it had all been an act.

Even as our favourite celebs face the ups and downs of life, including tough breakups, it’s hard for us to believe them because we can’t differentiate between the truth and the clout chasing.

Now, as comedian Mulamwah and Carrol ‘Sonie’ sort out their issues publicly, it's difficult to take them seriously.

From Mulamwah parading his alleged new girlfriend immediately after the breakup to saying he is not the father to Sonnies’s child, the comedian has taken followers on a roller-coaster ride.

Even a staged hate crime

Although cases of international stars seeking clout have not been as rampant as those of Kenyan celebs, it is notable that there has been an attention-seeking case that has gone so far that the culprit faced jail time.

So powerful was the concept of fame and legacy for American actor Jussie Smollet that he has now wound up in jail, charged with orchestrating a fake hate crime.

In January 2019, the 39-year-old staged a violent crime against himself in Chicago and later made false police reports about the incident. The actor was found guilty of five charges in December 2021.

Clout chasing might be working for some celebrities to remain relevant but soon it may work to their disadvantage and even the most genuine cries for help will be ignored.

Share this article on social media
Next article
Brown Mauzo tells Vera he wants more babies
Next article
Elon Musk breaks silence on Twitter, posts a picture with the pope
.

By Vincent Kejitan 2h ago
Will you marry me? Kenyan musician declares undying love for Martha Karua

By Reuters 1d ago
Verstappen now ready to cooperate with Netflix

By James Omoro 1d ago
Elders: Single men, women are 'not fit to lead', get life partners first

By Vincent Kejitan 1d ago
Bahati: Diana moved out of our home a number of times after disagreements