By Tamarah Patience and Vincent Kejitan | 1 week ago 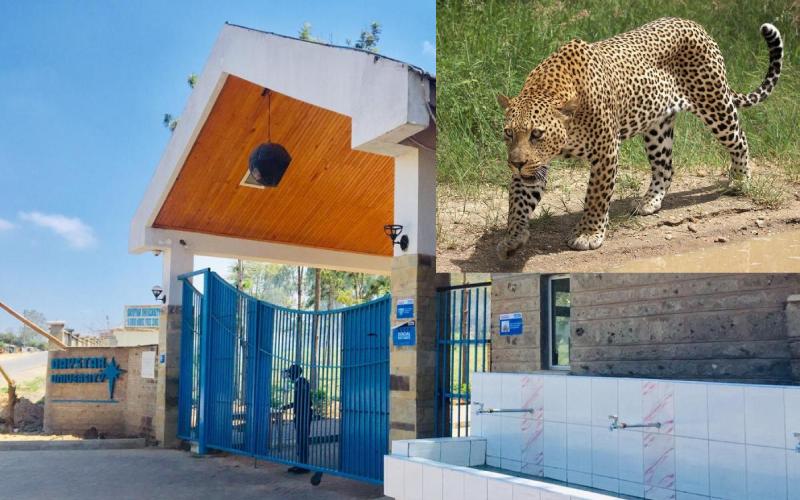 Students at Daystar University, Athi River campus, were on Monday informed about a leopard that was on the loose within the premise.

Through an email sent to students of the institution by Caroline Mwangi, the campus administrator, it emerged that the leopard vanished in a thicket near the Dam adjacent to Central stores.

Speaking to Standard Entertainment, Patrick Dalizu, a security and logistics coordinator at the university, confirmed that the animal was spotted by a herder who immediately alerted relevant authorities.

“Yes, a leopard was spotted at the institution on Monday evening by a herder. It is highly likely that it wanted to attack some of the goats that were grazing.

“So far we have put the necessary measures in place and we have contacted KWS to help us in capturing the leopard,” he said.

Further, Dalizu noted that students have been advised to walk in groups and avoid moving around at night.

“The leopard was spotted some distance away from the hostels but we cannot take chances. We are confident we shall capture it in the course of the day since KWS officers have already laid traps in and around the campus,” added Dalizu.

In a memo that did rounds on social media, the campus had outlined some precautionary measures to take in case one comes across the carnivore;

There was particular interest in the last precautionary measure and Dalizu was quick to clarify that it can be a lifesaving move.

“Holding your ground and waving your hands or clapping above your head will make you appear bigger and this can repel the leopard.

“They prefer prey that is smaller in size,” he said.

Dalizu also added that a number of wild animals and snakes are often spotted near the campus but the school has put in place measures to ward them off.

Harmonize promised to support the initiative fully and actively play his role in ensuring that others also take up responsibilities.