A quick-thinking maid scoops up a child in her arms and rushes out of the room as the Beirut explosion rocks the city in an amazing moment amid the tragedy. CCTV footage shows the heroic woman slowly vacuum cleaning as the little girl wanders across the play area just before "one of the biggest non-nuclear explosions of all time". And within a matter of seconds, window blinds rock forwards before the glass windows burst into smithereens from the shockwave of the blast. But with an incredible piece of quick-thinking, the maid quickly leans over and grabs the girl and pulls her close to her chest.

More than 100 people - at least 113 - were killed in the huge blast which wrought devastation in the capital of Lebanon. The cataclysmic explosion, caused by 2,750 tons of ammonium nitrate, left 4,000 people injured and the city resembling a scrapyard of destroyed buildings. The explosion was a fifth of the size of the Hiroshima nuclear bomb and is thought to have been triggered by fire sparked by a welder. Lebanese rescue workers searched for survivors in the mangled wreckage of buildings and investigators blamed negligence for the disaster. Up to 250,000 were left without homes fit to live in after shockwaves smashed building facades, sucked furniture out into streets and shattered windows miles inland. The death toll was expected to rise.

The damage is thought to have spiralled to more than $1billion, with thousands left homeless. Lebanese President Michel Aoun said 2,750 tonnes of ammonium nitrate had been stored for six years at the port without safety measures. He declared a two-week state of emergency for Beirut and vowed the "harshest punishments" for those responsible. Ammonium nitrate is an industrial chemical commonly used in fertilisers and as an explosive for quarrying and mining. It is an oxidiser considered relatively safe if uncontaminated and stored properly. But it is extremely dangerous if contaminated, mixed with fuel or stored unsafely.

A large quantity of ammonium nitrate exposed to intense heat can trigger an explosion. Storing the chemical near large fuel tanks, in bulk in large quantities and a poorly-ventilated facility could cause a massive blast. The larger the quantity, the more risk it will detonate.

"On a scale, this explosion is scaled down from a nuclear bomb rather than up from a conventional bomb," said Roland Alford, managing director of Alford Technologies, a British company that specialises in the disposal of explosive ordnance. "This is probably up there among the biggest non-nuclear explosions of all time."

"Video footage of the incident shows initial white-grey smoke followed by an explosion that released a large cloud of red-brown smoke and a large white 'mushroom cloud'. These indicate that the gasses released are white ammonium nitrate fumes, toxic, red/brown nitrous oxide and water," said Stewart Walker from the school of Forensic, Environmental and Analytical Chemistry at Flinders University.

"If you make ammonium nitrate explosive, you shouldn't get that brown plume. That tells me the oxygen balance was not correct - so it wasn't mixed as an explosive," he said. "The Beirut blast looks like an accident unless it was arson."

Ammonium nitrate can be mixed with other substances to make a bomb. It was used in Irish Republican Army (IRA) bombings in London in the 1990s, the 1995 explosion that blew up a federal building in Oklahoma City, killing 168 people, and the 2002 blasts in Bali nightclubs in which more than 200 died. Many of the homemade bombs that were used against US troops in Afghanistan contained ammonium nitrate. 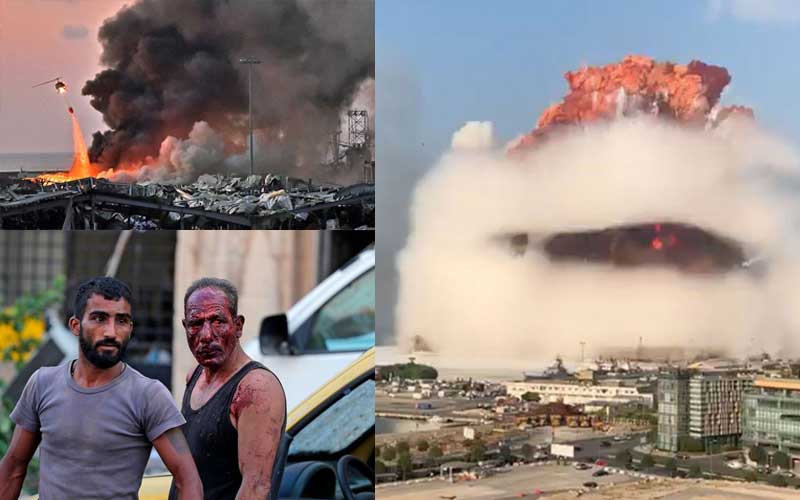