The wife of Kobe Bryant has filed a lawsuit against the company that owned the aircraft that crashed and led to the tragic death of the LA Lakers legend, daughter Gianna and seven others.

Vanessa Bryant has filed a lawsuit that alleges that the company who owned the Sikorsky S-76B helicopter, Island Express Helicopters and Island Express Holding Corp, were only allowed to fly under visual flight rules, and the conditions the day of the crash were not conducive for such flying.

The complaint, heard in Los Angeles County Superior Court, also claims that pilot Ara Zobayan, who also died in the crash, failed “to use ordinary care in piloting the subject aircraft” and was “negligent.”

Additionally, it alleges that the pilot was disciplined in 2015 for violating the visual flight rule minimums by flying into an airspace of reduced visibility.

The pilot of the helicopter, who was among the nine killed, had lengthy experience in the air.

He had 8,200 hours of total flight time and had completed the same route the day before, albeit in clear conditions.

Last month, the New York Times claimed, according to sources, that the pilot did not have the legal authority for that specific flight as the charter company did not have the necessary Federal Aviation Administration certification.

Air traffic reports showed that the chopper circled for more than 15 minutes before its final, fatal descent around 21 miles (35km) from downtown Los Angeles.

Los Angeles Police Department confirmed in the aftermath of the tragedy that conditions were not suitable for flying when Bryant's helicopter crashed.

Foggy conditions blanketed the area and a spokesman for the force confirmed flights from the Air Support division were grounded as a result.

"The weather situation did not meet our minimum standards for flying," spokesman Joe Rubenstein said, as reported by CBS. "The fog was enough that we were not flying."

Orange Coast College baseball coach John Altobelli, 56, his daughter Alyssa and wife Keri were also among those who died, as were mother and daughter Sarah and Payton Chester.

A public memorial to Bryant and the others who tragically died on January 26 took place in LA on Monday at the Staples Center.

More than 88,000 people applied for tickets to the memorial service in the first five hours, with a limited number available to the general public. The rest were reserved for friends, family and members of the NBA community.

The likes of fellow basketball legends Kareem Abdul-Jabbar, LeBron James, Steph Curry and 'Magic' Johnson were all in attendance. 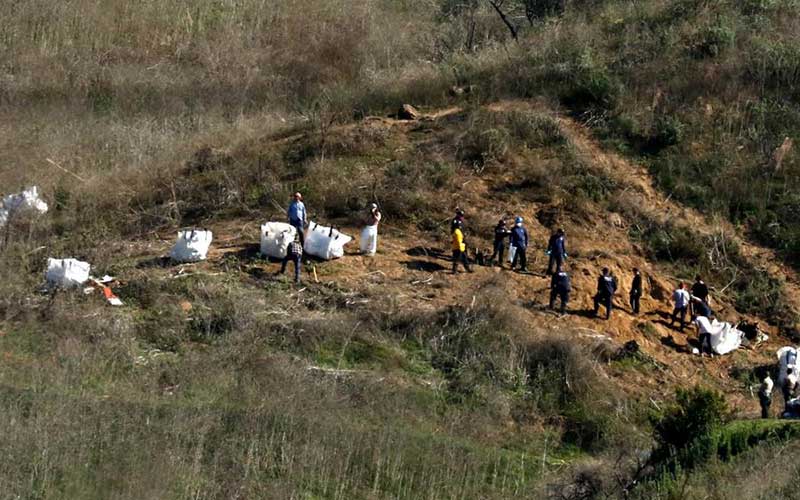