By Tony Mochama | 4 years ago 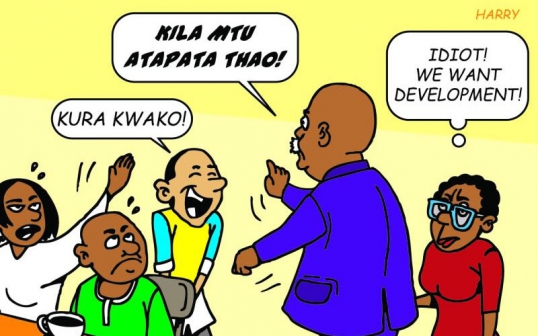 I was meeting a friend at The Railway Club the other weekend when I happened upon a ‘Sonko’ campaign meeting at Uhuru Park. Later on as I left the Luna Park venue where the club is located, we happened upon an amazing sight.

An old Probox was taking off at full speed with about a hundred hooligans in hot pursuit, chasing after it and shouting ‘pesa yetu.’ This week of party nominations has brought out the political animal in his full naked gory – a greedy ‘wannabe’ of the very worst kind to be found anywhere.

Even as you vote – whether for president or for your local MCA (and Women’s Rep), do you really believe these folks are running for office so that they can bring meaningful ‘change’ to the lives of locals? Do you think they go to sleep dreaming of that good road they would wish to build, that school so kids can be educated in better facilities? Do you imagine that in their sleep, they are dreaming of dispensaries? Or of all the cash they will steal from public coffers once they are in office as well as that wannabe tripping to Singapore to ‘see’ how the sewage system there operates?

Then there is the ‘showbiz’ wannabeism of these politicos.

I said here the other day that they have gone from raising dust with flashy convoys on the road as they campaign, to covering locals with dust as they land in hired (or even bought) choppers.

We have become a ‘helicopter’ democracy – where these wannabes show us dust. We eat dust!

Voters go to rallies to get caps and T-shirts that they will walk around with until 2022, while the fellow on the T shirt is busy robbing the public blind. I was surprised, but not very, to see a man on a bus earlier this year with a T-shirt that said ‘Kibaki Tena!’ This, in 2017.

Then of course there is the thievery that is going on by these wannabe leaders that cannot be stated enough, never mind that a lot of the electorate view these crooks who carry cash in sacks as heroes and heroines – and are ready to elevate them to offices where they can even plunder more – yet they will be the first to chase after a chicken thief in the village with every intention of lynching huyo mwizi wa kuku.

If life was drama, the campaign posters of many of our wannabe politicos would be on the walls of police stations under the banner – ‘Wanted.’

The stealing, of course, begins right at nomination level with stuffed ballots, missing boxes and all sorts of skullduggery (that even includes the odd daggering of a skull).

And what is it with all the recent cases of violent wannabes being found ferrying around simis and rungus in the cars of these politicians? Why would anyone who was not insane go purchasing machetes before a nomination exercise and then carry them in their car to some primary school? In an ideal world, such folks would be charged with ‘loitering with malicious intent’ and carrying crude weapons – or crude wannabes carrying weapons.

It is only when it comes to our wannabe politics that one finds that the dead not only rot – but that they also vote! Otherwise how does one explain the fact that the name of someone who died in the August of 1987 can not only still be found in the voting register – but their thumb print too after an election that says, yes, the corpse exercised its democratic right to vote?

Politicians these days no longer bother speaking about their policies or anything sensible.

They just take to the stage and do a jig with some old women dancers – and all that shoulder shaking and twisting a leg so vigorously it could fall off tells us this.

That dancing wannabe up there is about to take us for a ride for five years.