The Wannabes: Cars, guns and other man things for wannabes 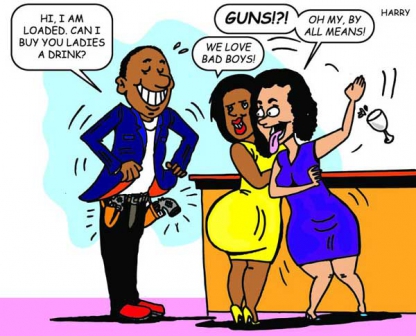 A couple of weeks ago, there was a big brouhaha whether Mombasa Governor Ali Hassan Joho was going to surrender his bodyguards and firearms. When the government withdrew a phalanx of his bodyguards on the orders of the often mercurial General Joseph Nkaiserry, the big man of Mombasa just shrugged his shoulders.

When a man called Marwa (which means alcohol in Ekegusii) asked him for his firearms, Joho went ‘Soho’ on him and flat out refused, even when threatened with arrest.

Governors have many enemies, so maybe they need their firearms. But what makes me cheka is those wannabes who carry their Ceska pistols even to clubs, where after a bit of whisky, they now push their jackets to one side to let some funny socialite with a big butt spy the butt of their gun. What the hell is that supposed to do, be a turn on or something?

Are there actually some women in this city who get wet when they see a weapon strapped to a man’s belt? I don’t know if there is such a fetish, but I’d be more worried about the physical danger rather than physical allure such a fellow represents.

Talking of which, then there are those wannabes who like to say or show that they have the biggest cojones in the county, literally. Every male I have ever met, especially after a few bottles, of course makes the ladies moan and scream.

So, why are there so many unsatisfied and angry women grumbling to their friends across the, pun alert, lay of the land? Even a moneyed idiot like Donald Trump felt compelled to say in a debate that his cock(erel) was the size of his hands (I guess this wannabe US president has his own full measure because he is such a wanker). You go to a urinal and some Nairobi drunk is making a big show about shaking his schlong.

Speaking of money, it is very wannabe to talk about how much money one makes in public.

Dress well, but remember the saying, ‘Man makes cloth, but clothes do not make the man.’

Wearing a Hugo Boss suit will not make a wannabe a leader. Leaders are naturally seen from the sound decisions they make, and how they ‘wo/man­manage’ others.

Then there are the wannabe men whose entire masculinity is in their cars.

He owns a big black Prado with iron burlaps and wants to run everyone else off the road.

If you have to find your ego in sculptured metal made in Tokyo or Bavaria, then you are a really naked and worthless wannabe, because you cannot stand strong in your own thin skin and bones.

Also, some wannabes should stop buying huge flat screens that occupy their entire sitting rooms, yet they live squeezed themselves like mice in tiny wainscot.