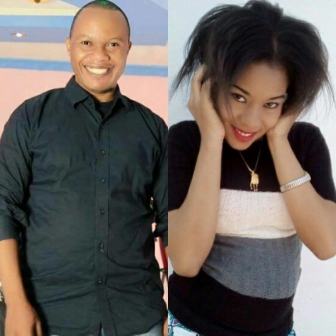 After their nasty break-up two years ago, singer Gloria Muliro’s former husband Eric Omba is warming up to his new flame, Bella Dee, a Nairobi beauty who could be his wife soon.

And Gloria, the celebrated gospel singer who moved on after what she described as an ‘abusive marriage’ is less concerned. She too, has her eyes somewhere else. Introducing his new heartthrob through a Facebook post last week, Omba, a self-styled pastor and gospel singer who also runs a recording stable ironically went ahead to allude that he is still thinking about remarrying Gloria yet.

The little known Bella Dee is a model whom a source described as a ‘showbiz girl’.

Pastor Omba and Gloria had tied the knot back in 2009 in a colourful wedding before it fell apart. Later Gloria opened up on the ordeal with the former husband describing him as ‘unfaithful’.