Outpouring of tributes and tears as Joyce Laboso laid to rest

By Dalton Nyabundi | 2 years ago

The grieving family of the late Bomet Governor Joyce Cherono Laboso stood in the scorching afternoon sun and threw balls of earth to her grave as they bid goodbye to a leader whose death has united a country, hitherto divided by ethnic and sectarian politics.

At 2:33 pm, Kenyans, led by President Uhuru Kenyatta, his Deputy William Ruto, Opposition leader Raila Odinga and a retinue of leaders let go of the heroine and handed her body to the family for burial.

With their heads bowed and handkerchiefs in hand, the dignitaries who had attended Laboso’s final journey at her Fort Tenan Home in Kisumu County trooped out of the giant tent as the final trumpet sounded for one of three of Kenya’s first women governors.

After days of mourning and tear-jerking eulogies that could form several chapters of a bestselling book, Kenyans had little to say yesterday, except to fight back tears as reality struck that the former teacher turned politician was gone, for good.

A deadly silence descended on the tent soon after President Kenyatta concluded his brief eulogy, signalling that it was all over for the Iron Lady of Bomet.

As the President ended his speech, Laboso’s husband, Edwin Abonyo whose gripping eulogies since early this week have immortalised his wife, stared into the tent’s ceiling, reached for a handkerchief and buried his face into his left palm. He was to lead the family to the graveside.

As Laboso’s body, immaculately dressed and placed in sparkling coffee brown coffin was wheeled to the graveside where entry was restricted, the pain became unbearable.

Mr Abonyo remained brave as he has done since Laboso died at Nairobi hospital on July 29, but his children wept.

Family members who earlier put on brave faces as they poured their hearts out in touching tributes burst into emotional tears as the casket, draped in a Kenyan flag, was lowered into the grave.

Inconsolable, they soaked each other’s shoulders in tears as the woman they described as a crucial family and community pillar was laid to rest.

The final send-off was limited to close family members and political leaders led by President Kenyatta, Ruto and Raila.

Hundreds of mourners from far and wide, including some relatives from Kisumu and Sotik, were kept away from the gravesite. Even those who passed through several barricades leading to the home found themselves locked outside the compound.

Mourners in their thousands had flocked St Augustin Secondary School where the final requiem mass was dominated by emotional tributes in honor of the governor.

Kitui Governor Charity Ngilu was among those who broke down as she eulogised her colleague with whom she and several other women leaders spent final days.

Elachi recounted how Laboso asked them if they had drafted her funeral programme.

The late governor, described as a woman of firsts, was lowered to her grave shortly after 3 pm amid tears, chirping of birds from the nearby valleys and a chorus from an ACK choir.

The family said in death the county boss had found peace, having lived through painful last days.

Her eldest son Bryan Ochieng Kibet said their mother’s health had significantly deteriorated over the past few months and she had been in great pain. “We have accepted that she is no more. We want her to go and rest,” he said.

He eulogised his mother as a brave fighter, who despite having learnt of her terminal illness in 1991, pushed her family to garner for the best as she chased her ambitions as well.

Laboso had found peace in death, he said, having lived through trying last days. “Her health had deteriorated in the last months and she was in great pain.” 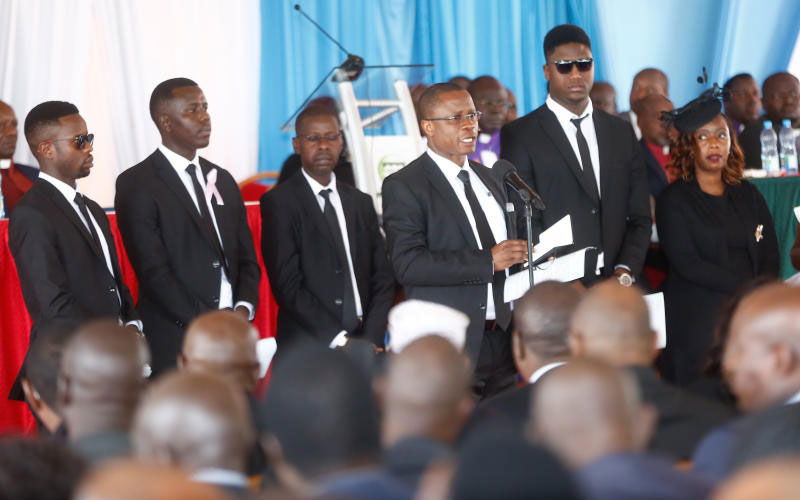 President Kenyatta described Laboso’s death as a terrible blow to Kenya, saying she was not only humble but the face of women folk in devolution.

“She achieved a lot as an MP, deputy speaker and governor, but she never thumped her chest. She was always humble and always wanted Kenya to be a great country,” Uhuru said.

Ruto said Laboso overcame traditional stereotypes to become Sotik MP and Bomet governor at a time when she was married in Luo land. He described her as stoic, having bravely fought the disease.

Former President Daniel Arap Moi, in a tribute read by Baringo Senator Gideon Moi, described Laboso as a “beacon on a hill for many” as she remained stoic in face of her ailment which she bore with fortitude and courage, rising to become a political mentor for the country’s womenfolk.