Researchers on HIV have reported a breakthrough in reaching Kenya’s most hidden gay men as World Aids Day was observed on Saturday.

Mapping the Internet, researchers have identified a big number of gay men in Kenya, some who only transact through online networking sites.

“We are now able to reach a big number of a previously hidden group with HIV health care,” researchers said in a report.

The Virtual Mapping exercise carried out from June to July uncovered 6,672 gay men from Kisumu, Kiambu and Mombasa counties.

The three counties had been selected for the study due to their regions’ high HIV prevalence rates, significant Internet use and relative urbanity.

The study was carried out by the National Aids and STI Control Council (Nascop) of the Ministry of Health and the University of Manitoba, Canada.

The final report prepared by Nascop and a private NGO, Partners for Health and Development in Africa (PHDA), says this is a major breakthrough in HIV control.

It is estimated that there are about are 19,175 MSM in Kenya. The HIV prevalence in this group, at 18.2 per cent, is three times higher than in the general population. Nascop says this presents a serious risk in the spread of the disease.

Traditionally, the new report says Kenya’s MSMs have been meeting their clients in a variety of ‘brick and mortar’ hot spots.

For example, in Nairobi’s CBD, estimated to have 11,000 MSM, most of the traditional hot spots, about 137 work stations are concentrated in a small area around River Road.

These are within a one kilometer radius of the Sex Worker Outreach Programme (SWOP) clinic on Keekorok Road in Nairobi.

Through the strategically-located SWOP clinic network, HIV researchers report to have mobilised more than 74,000 male and female sex workers. 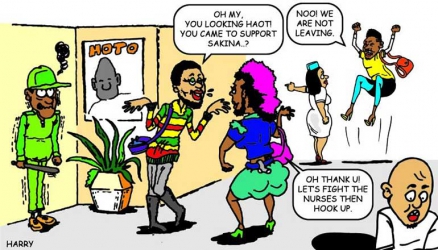