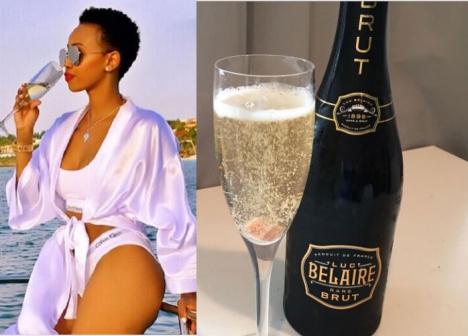 Her haters and rivals will wish the earth could open up and swallow them alive as the controversial socialite lands another mouthwatering deal. Huddah has been named as one of the East Africa brand ambassadors for alcoholic drink Luc Belaire joining American rapper Rick Ross and Dj Khaled who are also brand ambassadors.

The limited edition bottle was launched at B-Club on the 31st in a star studded party dubbed ‘Black Bottle Glow Party.’

‘The event was to usher in 2017 in style and officially launch the Luc Belaire brand in Kenya. Internationally, Luc Belaire is currently one of the most in demand beverages in the nightlife industry, being heavily marketed and endorsed by brand ambassadors; American superstar rapper Rick Ross, DJ/Producer DJ Khaled and many other celebrities in the entertainment industry, who identify themselves as #BlackBottleBoys & #BlackBottleGirls.’ The press release of the launch read in part.

Although Huddah was absent, the well-attended party attracted the likes of Nick Mutuma, Madtraxx, Dj Stylez amongst others who were in attendance. Looks like she wasn’t joking when she said she has big things in store for 2017.