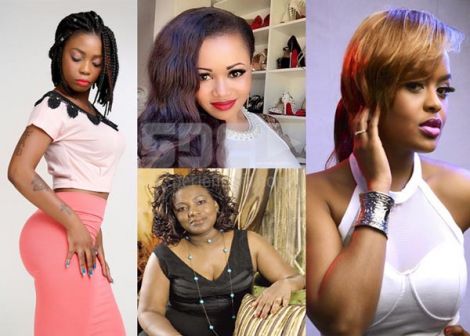 Some celebrities prefer to court controversy knowingly or unknowingly perhaps to stand out among their peers or remain relevant. CAROLINE NYANGA brings you a list of some of the most controversial local female showbiz personalities.

After the release of her hit single ‘Chokoza’, one of Kenya’s hottest female artists, Avril was strongly criticized as the song has undertones of lesbianism – a taboo subject in Kenya.

Later, the public was stunned by leaked photos of the singer where she was making out with a woman. However, all these provocative acts made her even more popular in the showbiz scene. Despite this singer also likes to shock a crowd with rather extravagant dresses. And so far things seem to have worked out in her favor.

Socialite Pendo gained her controversial reputation after she claimed that she had slept with gospel singer Willy Paul also known to have courted controversy as his middle name.

At the time Willy Paul’s name had been tarnished and his career was on the brink of destruction when Pendo finally admitted it was a fabrication for her own ‘showbiz gains’. However, she didn’t stop spreading rumors about dating other celebrities.

Her second victim was Nigerian rapper Davido, and after him was Kenyan football ace Dennis Oliech. Who knows who might be the next. Indeed, this clearly shows the lengths at which one can go in order to remain relevant in the local showbiz

Kenyan music video model, Vera Sidika, gained her popularity after she appeared in P-Units video ‘You Guy’ that was banned in some TV stations for explicit content. The most prominent part of Vera Sidika’s body is her booty.

As a socialite she doesn’t mind showing off her half-naked body in music videos, a number of West African artistes inviting to appear in their music videos. Working hard, Sikida is said to own a top of the range car and an up market apartment in a leafy suburb.

Apart from everything, Sidika was criticized for saying that she never wears underwear. And only recently Nigerian actor Mike Ezeruonye openly critized Sidika claiming she has a habit of hitting at any man she comes across. He even went to point out that he would prefer Vera’s rival Huddah Monroe over her at any given time.

Monroe is considered to be the most controversial female celebrity in Kenya who contested in the ‘Big Brother Africa’ show. She is known for her explosive personality.

The socialite seems to be cool about her nude photos circulating online. Monroe also shared photos of herself smoking in a joint like it’s nothing inappropriate. She believes that women should use their lady parts to get what they want from men.

Although she is a politician, in another life Rachel Shebesh would definitely be a celebrity. Apart from her natural beauty, Nairobi women representative is known for a bare knuckle politics and dares whoever she feels infringes on the rights of the people she represents.

This has earned her some beating but Shebesh doesn’t seem to slow down. The beautiful legislator was also in the news for allegedly being involved with another lawmaker. The photos leaked online but this hasn’t deterred her from carrying out her duties. These are the hallmarks of a true celebrity.