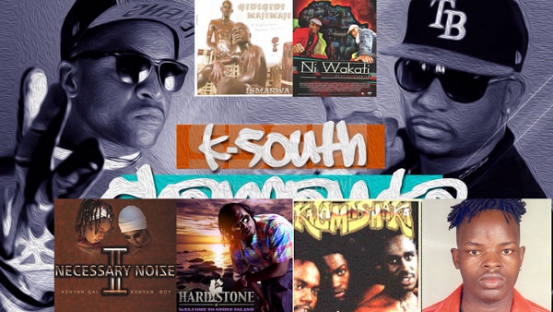 Kenyan hip hop has been around for a while but its genesis is a question that even Kenyan artistes are still grappling with.

While a section of local entertainers credit pioneer musician Jimmy Gichu for having paved the way for local hip hop in the mid 80’s - others believe it was it was Jimmy Gathu with his self-recorded classic throwback hit Look, Think, Stay Alive released in 1991 alongside his Impulse group. The single won the hearts of many and was billed one of the greatest songs of the 90s.

Senior entertainment writer George Orido disagrees saying it was singer Hardstone who takes all the credit for introducing and popularising local hip hop.

“It depends on your perception on the music. To me hip hop is a popular genre among the youth- and indeed the hit Uhiki by Hardstone did not only earn its status as Kenya’s first ever-commercial but also transformed Kenyan’s pop music,” says Orido.

While crediting Gichu and Gathu for their role in paving way for the local music as well as making it appreciated to some extent – Josiah points out that two are Rhythm and Blues musicians and have nothing to do with hip hop.

“The only similarity between their kind of music and hip hop is their social and political conscious lyrics that reflect on daily life happenings within the society. Things that we know but are afraid to talk about. However, their styles and beats remain different,” says Josiah.

Josiah explains that Kalamashaka was formed way back before 1995, and went by the stage name 3D (Three from Dandora). The trio who resided in Dandora, a neighbourhood full of crime, drugs, police brutality, murders and gangs released three hip hop hits among them Ruka Ruka recorded by Josiah.

“Although the songs were popular among their fans, it was the hit Tafsiri released in 1997, followed by Songa Hapa that catapulted them into the limelight.”

Josiah adds that the trio later changed their name to Kalamashaka - ‘Kala’ a Swahili for ‘ate’ while ‘Mashaka’ means ‘trouble’ prior to releasing Tafsiri and Songa Hapa.

“Anyone who clearly understands local hip hop music will agree that Kalamashaka crucially paved the way for Swahili hip hop to become mainstream in Kenya,” He concludes.

Their first album Ni Wakati released in 2001 was a hit with South Africa's Channel O frequently playing one of the videos, Fanya Mambo, from the album.

Josiah says Kalamashaka was the first local hip-hop group to perform in Nigeria, Sweden, Holland, South Africa and Norway among others.

Odhiambo points out that the trio did not only pioneer local hip - hop but equally commercialised it locally and abroad.

“Kalamashaka were the first hip hop musicians to perform for international rap stars, among them Coolio and Lost Boyz besides doing collaborations with Dead Prez and other international artists,” Odhiambo says, adding that although Hardstone’s Uhiki earned its status as Kenya’s first ever-commercial local music it learned towards ragga and had nothing to do with hip hop.

Veteran Obachi Machoka and emcee Big Ted are in support of Josiah and Odhiambo.

“It is high time Kenyan’s realised that despite the misguided notion that Jimmy Gichu and Gathu are the founders of local hip hop it is infact Kalamashaka who introduced hip hop music locally,” says Machoka.

A number of artistes interviewed on who they think is the godfather of Kenyan hip hop are of the opinion that Kalamashaka are indeed the founders of Kenyan hip-hop.

Meanwhile, Jimmy Gathu describes his music as classic oldskool Rhythm and Blues including that of Jimmy Gichu. He says although their messages may be similar to that of hip hop – comprising conscious lyrics – but the style and beat are different.

Kalamashaka trio (Oteraw, Kamaa and Johny) made their entry into the hip- hop scene with three popular songs among them Ruka Ruka in 1995.

It was however, their national chartbusters Tafsiri Hii and Songa Hapa, produced in 1997 by Tedd Josiah that defined hip-hop in Kenya.

Not only did it transform Kenyan’s pop music but won Hardstone the Best New Artist in the 1997 Kisima Music Awards.

His success was followed by blends of hip-hop sang in vernacular and Kiswahili lyrics among them Msichana Mwafrika from his debut album Nutting But De Stone produced by Tedd Josiah.

(Note: Josiah joined Sync Sound as a producer in 1995 before he quit to form his own Audio Vault Studios in 1999 and renamed it Blue Zebra studio in 2002).

Hardstones’ creativity in introducing an original mix in a local language based on local issues made him a star.

So popular was Nutting but De Stone that it sold numerous copies upon its release.

“Some of our greatest shows were in Nyeri and Nakuru. During these times I was accompanied by a tight security,” recalls Hardstone.

But despite the album’s success, Hardstone and Josiah reveal that neither of them can so far confirm the number of copies sold.

“I believe we made a mistake from the word go by signing with the German Kelele Records. Although it is reported that they sold numerous copies of the album over the years - they never gave us definite information on this,” says Josiah.

Hardstone was later to leave for the US where he is based in Cleveland since 1998.

To show that he is still keeping his hip-hop dream alive Hardstone has so far released albums like Hardstory and Stone Republic that are doing well abroad.

Upon Hardstone’s  depature Kalamashaka went on to release more hits. Their music not only revolutionised the local hip-hop scene but popularised the use of Swahili language in the genre.

So popular were they that American rapper Snoop Doggy Dog who played their music on his Snoop Radio once described them as the best rappers from Africa.

The latter released a 22-track album Kilio Cha Haki with favourites like Fanya Tena, Sina Makosa and Kilio. They followed it up with another album Dandora Burning in 2006.

So popular was the single that it played around the clock in most matatus within and outside Nairobi.

Produced in 1999 by Bruce Odhiambo the album contained favourites like Otonglo Time and Mummy.

Sang in Dholuo language with forceful and hard hitting lyrics the song appealed to many fans across the world due to its universal cultural theme based issues.

According to the producer Bruce Odhiambo, Total Bala lit the scene like bushfire.

“It crossed all language barriers paving way for the use of mother tongue among rappers from Nairobi’s Eastlands’ slum estates,” says Odhiambo.

Despite his success, his track Wape Really attacking the media, promoters, producers Josiah and Odhiambo coined him the name ‘Bad boy of Kenyan music.

As a solo artist following disintergration of K-South, Bamboo continued to hold onto the hip hop dream with favourites like Mi Natafuta Dame (a gospel rap as a born again Christian), Usilete Compe, Love Vs Hate, Mrembo, 25 flow and a mix tape dubbed Therealbamboo.

A Ted Josiah production, the project sold a colossal number of copies upon its release.

Done in ‘Chwodho’ style Ting Badi Malo appeared on The 2004 Rough Guide to the Music of Kenya compilation CD.

The well- researched album comprising Luo myths, proverbs, instruments and sounds defined what their producer, describes as a re-statement of identity:

“If you’re an African there are certain cultures and traditions that you’ve grown up with regarding our language and musical styles – and hence we are left with no choice but to make good use of them if we hope to reach out to people in a better way,” says Josiah.

Another smash hit Unbwogable and a similarly titled album catapulted their career to international fame.

Unbwogable was adopted as an anthem for Mwai Kibaki's victorious presidential election campaign by the opposition in 2002.

“The CD featured two of the best and most famous songs done by us, that is Atoti and Unbwogable,” says Maji Maji.

Their third and last album Many Faces produced by South African Gallo Records in 2003 saw them win several awards besides touring USA and Europe before disappearing from local live performances.

Necessary Noize (comprising Bamzigi, Nazizi and Wyre) entered the scene in the year 2000 with singles Clang Clang, and La Di Da from their self-titled album recorded by Josiah.

This marked the rise of Kapuka and Genge music in Kenya with several artistes sprouting into the scene.

Between the years 2007 and 2013 a large number of new groups and artists have emerged with diversified sounds.