Ten of the best Kenyan music albums since 2000 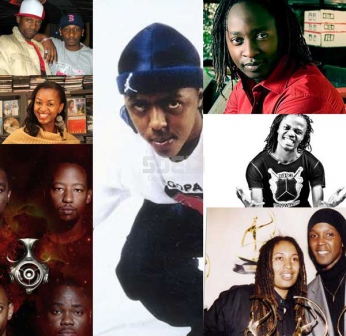 A classic album is known for more than just its timelessness.

It is more than just one hit single carrying the rest of the songs. It is a beautiful work of art with the quality and intimacy woven through all the songs. Its emotive content evokes a sense of nostalgia and reverberates long after the album is released.

This is the album that won NN2 the fame and the acclaim.

Mixing hip hop and RnB as well as Reggae effortlessly, it dominated airwaves and never lost its freshness. Nazizi and Wyre have since gone to achieve bigger things in their careers but this album was the epitome of everything we love about them.

It was filled with hit after hit from Kenyan Boy Kenyan Girl, Nataka Toa, Tension and the prayerful Bless My Room in one of the most hits-studded albums.

He may no longer be the force that brought/ redefined/popularized Ohangla music, but when Tony Nyadundo released his second album Kidi Oba e Toke, he was literally alone at the top. Not just as an Ohangla singer but in the country.

The album’s success showed that traditional music could sell nationwide and every club DJ played the songs in this album with hits like the titular, Kidi Oba e Toke as well as Ndoa Ya Machozi and the magical Dala Gi Mama Nyiri Beyo.

This is one of the albums that cut a unique path in a pretty congested hip hop scene at the time. It came after the first album Nairobbery had placed the group on the national limelight.

However, in this album the duo of Abbas Kubbaf and Bamboo were more mature, more experimental and all packed punch lines to last you for days.

It is the album that set the dissing game on fire with Kapuka This and made it entertaining to listen to an HIV/AIDS prevention song in Tumesikia while you can nod to Nyama on any slow day and laugh to it. The interchanging styles through the song and the Tim Ennovator Rimbui produced beats were and are still unique up to now.

I guess if one of your album’s songs gets the whole country to trend and becomes the first viral video in Kenya, then the album deserves classic status.

Well, Just a Band’s second album had more than just one riding factor. In this album the group moved from just making experimental Afro-Fusion music for a specific audience to music that could cut across all classes. They may not receive their deserved love but their 82’ album got them recognition and national attention as they set the ground for funky music that could resonate with the average rural person. From the record setting Ha-he to the danceable Huff and Puff to the dreamy Migingo Express every tune in this album is a journey to music haven.

This is the album that set records in terms of sales breezing past the five hundred thousand mark as everyone was still understanding the new phenomenon that was a platinum selling album. The success hit Kuna Dawa was and is still the definition of a successful crossover hit having moved from the church confines to become a huge club banger.

Abbas Kubaff has been one of the consistent artists in Kenya as far as regular album production is concerned.

His two albums Angabanga and Mista Abbas are no doubt some of the best works the living legend has and while the former sure can make a case for inclusion, it is the latter that will always be a bonafide resident of any list compiled on the best albums.

It is without a doubt his Magnus Opus of all currently existing works. From the hood anthem Kariobangi South, the soulful Lala Salama to the surprisingly wisdom filled Murume, Abbas packs up so much tight lines and underlines his standing as the best word player around with puns and metaphors to match his bravado.

Each of Juliani’s album is an act of musical perfection. The lyrics well thought out, the whole album carrying a single idea with each song part of a story.

Thus picking one from the three albums he has so far is pretty tricky especially between Mtaa Mentality and Exponential Potential. However, Juliani’s third album has a greater crossover appeal than the first two. From the Utawala Anthem to the prayerful Jehova, the inspirational One Day, this was a classic as soon as it came out.

There is little that has not been said about this album or the artist who made it. If it is great to leave when at the top, no one will then ever top E-sir. His passing, talent, effort and passion have all contributed to elevating this album to the stuff of legends.

From the meditative Hamnitishi, the club banger Boomba train the silky Lyrical Tongue Twister through to the groovy MosMos, Nimefika was a superior album.

When 38 of the best artists in the country got together to form an album, it turned out to be a 22 hit epic that hits harder than a migraine.

The magic of the album is the easiness in which it draws you in. The reality is stark, the stories real and told with such skill. . When you start from Fanya Tena and slowly make your way through the worldwide popular All Over The world through to Johnny Boy’s sorrowful Mama We and the passion filled rap of a young Wenyeji Troupe down to the outro, this is an African Classic.

It may not have won him the Kisima Awards unlike his second album but Sawa Sawa still remains one of the best selling albums in Kenya.

Eric Wainaina first album is a work of inspiration, it takes you on a musical adventure from the radical protest song Nchi ya Kitu Kidogo to the spell binding Kenya’s unofficial national anthem Daima and in between you get to have fun in the folk song adaptation Ritwa Riaku.