Issah Mmari will forever be remembered as one of our greatest hip hop artistes. Nameless, who worked with him back in the day, tweeted, “12 years since you left us. I miss you bro!! Your music lives!! Timeless!!” 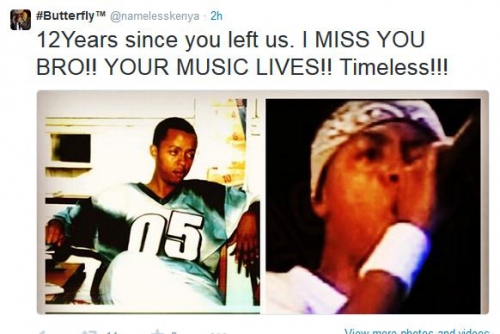 The artiste passed away in a road accident on March 16th 2003 but his music, which he well expressed in Swahili, still captures Kenyans hearts.

Here are some of the messages from his fans and showbiz industry.

‏@kennute1: When e-sir died I was in class one and i still listen to his music up to date #ESIR

‏@gathogo_k: #Esir music was and still is the dopest. Till today he's still the greatest in +254.

‏@theinsyder: 12 years, your lyrics still live on! Thanks for the music E-Sir

Chrispin Mwangale on Facebook: Twelve years have gone by since you left , and I still remember it like it happened about a week ago....You have been missed by your family,by your friends and by your fans....?#‎16thMarchEsir....Your music still rocks Your Name still lives On...?#‎Legend ?#‎Bestfriend ?#‎Nimefika ?#‎RIP....As promised I will always keep the fire burning....?#‎ESIR

Awkward moment as Betty Kyalo, Nick Ndeda meet at city club
Showbiz
By Standard Entertainment Reporter
14h ago
A house with a feel and touch of heritage
Lifestyle
By Nailantei Kenga
21h ago
Video games to watch out for in October
Arts And Culture
By Boniface Mithika
21h ago
New Amazon device will help track sleeping patterns
News
By AP
22h ago
Sue's shocking new cabinet
Showbiz
By Peter Theuri
22h ago
.