By Stevens Muendo and Jared Too
5 days ago

Kenyan Hollywood star Lupita Nyong’o has celebrated her brother after he wedded his fiancee in a private ceremony held in Limuru, Kiambu County. The Oscar award-winning actress congratulated her bother, Peter Nyong’o and his heartthrob Wanja Wahoro, on their wedding. Peter is the son of Kisumu Governor Anyang’ Nyong’o.

The two lovebirds tied the knot at Zereniti House and Garden, a luxury guesthouse. Lupita, who attended the event virtually, expressed her joy at the union. “Yup, he is off the market, folks! Sharing a moment of joy in my family’s life when my sweet, gentle, loving baby brother @juniornyongo made his declaration of love to his new bride @wanjawahoro this week,” Lupita wrote on Instagram.

And joining in the celebration was Star Wars actor John Boyega who wrote: “Yessss brooo congrats!” Lupita, the 37-year-old 12 Years A Slave actor, regretted that she could not travel home to attend the special day due to Covid-19 travel restrictions. She followed the nuptials via her laptop from where she took photos to share her joy with the world.

“I still cannot believe I was not physically present, but thank God for technology! Welcome to the family, Wanja,” she posted as she shared a photo of her viewing on Instagram. The big day, attended by family members and only close friends, caught many by surprise as it was a top-kept secret in the city.

Wanja, who was born in Australia, moved to Kenya three years ago but she is hardly captured in social circles. The two have never been public about their love. They got engaged last year and hardly went loud about it. The media-shy Wanja, a budding singer and songwriter, has only been quoted once, saying: “We met at a New Year’s event in 2015. It’s super long distance, but he’s always the person I send ideas and songs to because he’s also musical. He’s biased but also critical enough to give me pointers. He’s excited for things I do and is very supportive”.

On this special day, the bridegroom, Peter, who is also referred to as Nyong’o Junior, wore a golden yellow vest with prints on the front. The bride had a free-flowing sleeveless white dress. The two looked happy together as they broke the news of their union to the world even as they admitted that this was not the kind of wedding they had planned for.

“I will walk for miles to water your roots every single day until you are too tall and impossible for anyone to ignore. My strong steadfast Acacia. Ineffable in stature and beauty. The shade of your branches will always be my refuge,” Junior wrote. “You are a fixed point in my universe, and the best friend I’ve ever known,” Wanja wrote as she described her new man as “my best friend”. She went on: “Not the wedding we planned originally, but ultimately even more perfect and intimate than we could have ever imagined.” 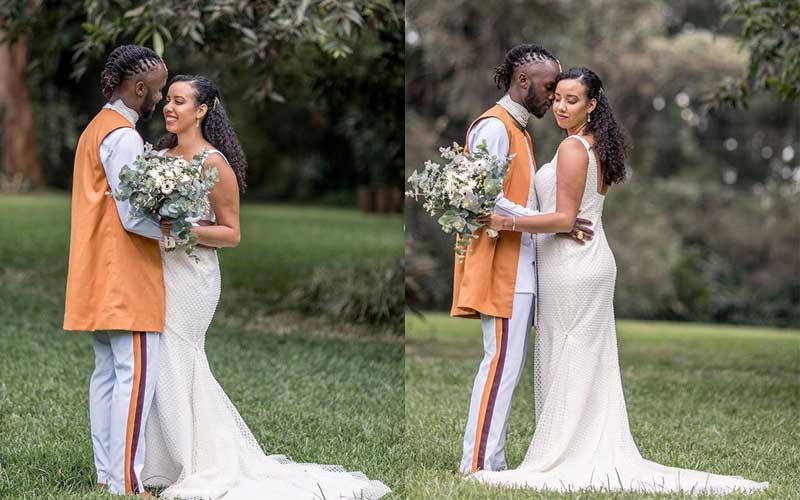 STORIES BY STEVENS MUENDO AND JARED TOO