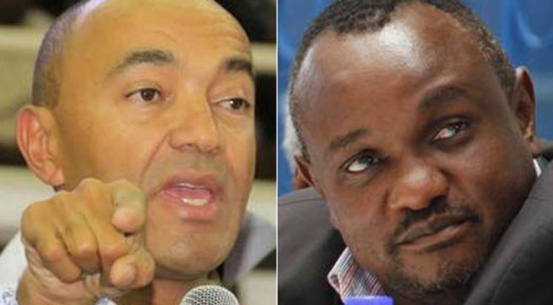 Nairobi gubernatorial aspirant Peter Kenneth and his running mate Dan Shikanda have one striking thing in common — both have traversed the Kenyan football scene for years.

Peter Kenneth served as Kenya Football Federation (KFF) chairman between 1996 and 2000, and is credited with bringing a level of professionalism not seen the exit of Kenneth Matiba.

On the other hand, Shikanda who is among a group of ex-footballers who have thrown their weight behind Kenneth in the gubernatorial race for Nairobi, is a former Kenyan international player and AFC Leopards winger who recently made an unsuccessful attempt in the FKF elections held last year in which he contested for the vice-presidency position.

In an earlier interview with The Nairobian, Shikanda said he was supporting Kenneth because the incumbent has failed them horribly.

“We supported this man (Dr Evans Kidero) to the last man, but he’s failed us,” he said, adding: “I was with Peter Kenneth in football. But he is the one who deserves to be Nairobi Governor. I’m supporting him,” he said.

Football lovers will want to know what the two gentlemen will do for the game should they be elected in August.

Vera Sidika: I have scheduled a day to give birth to baby number 2
News
By Vincent Kejitan
2h ago
Never give up on your dreams: Diamond tells his fans
News
By Vincent Kejitan
3h ago
Funeral home finds woman breathing hours after she was declared dead
News
By AP
7h ago
Salman Rushdie gives first interview since 2022 stabbing
News
By AP
9h ago
The Grammys ended in controversy, again. Here's what to know
News
By AP
9h ago
.