By Anil Bakari | 6 years ago 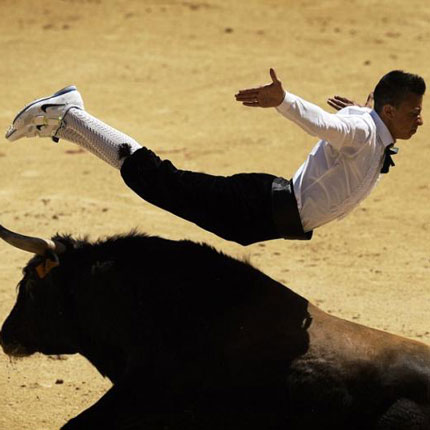 The Isukha, Luhya sub-tribe of Kakamega County have a version of bullfighting that has propelled their senator Bony Khalwale to fame and made him stay in Parliament for over a decade.

Away from home, the Spanish have their own kind which has seen many fighters gored to death by furious bulls that may not overcome those of Khalwale.

Now, here is another form of bullfighting that may not be so popular but is as scary as they come.

This is from Columbia and it involves acrobats jumping over a charging bull.

“The practice is an alternative to violent bullfights where men dress in their ceremonial outfits without using weapons like sword,” the Sunday Express reported of the event that happened at the close of the year and drew hundreds of tourists from different parts of the world.

“Crowds held their breaths as the acrobats known as recortadores risked being trampled as they flew over the huge black beasts.”

Perhaps this is way to go for the Kakamega senator if he wants to spice his show to make his event a tourist attraction.

Over to you bwana Khalwale, what if your bulls fight with human beings?