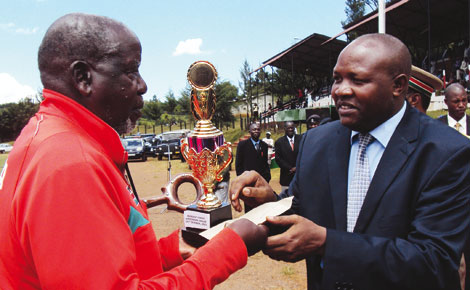 Wilson Chumo (left) is awarded during the recent Mashujaa celebrations

Since Kenya first participated at the Olympic Games in 1956, winning medals proved a hard nut to crack. For years, no athlete had won any Olympic trophy. But in 1964, one champion put the country on the global map.

Wilson Kiprugut Chumo was the first Kenyan and African, to win an Olympic medal when he bagged bronze in the 880 yards (now 800 metres) race at the 1964 Tokyo Olympic Games.

The 2010 Kenyan Sports Personality of the year and ‘Hall of Fame’ award winner remembers with nostalgia how tears of joy streaked down his cheeks as the Kenyan flag was hoisted for the first time in the history of the Olympic Games.

“To bag a bronze medal back then was no mean feat as we lacked proper training facilities, professional coaches and even running shoes,” Kiprugut, in his early 70s, says.

Kiprugut recalls that Peter Snell from New Zealand took the gold medal; a Canadian Bill Crothers took the silver medal while he brought home the bronze medal. He blames his third position on a Jamaican George Kerr, who allegedly tried to shove him out of the way.

“As a matter of fact, I was the one who led the tightly packed field at 200 (24.9) and at 400 (52.0). When Kerr pushed me, I was lucky to be strong and of good stamina, otherwise I would have fallen by the tracks.” He says that the Jamaican hit a stone on the edge of the tracks, but he stood his ground to actually run to a podium finish.

Nonetheless, the hero remembers with nostalgia how he was overcome by joy when he took to the podium to receive his medal.

“All eyes at the stadium were on me since no one had ever seen a black man achieve such a feat before,” says the champion.

The former senior sergeant in the army from Kericho County says he started running while still a student at Kaptebeswet Primary School and Sitotwet Intermediate School in the 1950s. He recalls taking part in the East African athletic championships in 1958, where army scouts identified his talent and recruited him into the African Rifles.

“I used to make a round trip of 40km each day to school, a thing that helped me to develop my running ability and enhanced my athletics stamina,” Kiprugut says.

After completing the armed forces training, the humble man who now concentrates on small-scale farming activities a few kilometres from Kericho town says he went back to training hard on the track. In 1962, he led the 4x 440 yards team, (whose other members were Kimaru Sonkok, Peter Francis and Seraphino Antao) in representing Kenya at the Commonwealth Games held in Perth, Australia.

“I believe we would have won some medals but unfortunately, some team members fell sick during the journey to attend the games,” Kiprugut says. Nonetheless, three years later, Kiprugut won two gold medals in the 400 and 800 metre races at the inaugural All African Games held in Brazzaville, Congo, in July 1965. In 1966, he participated in the Commonwealth Games held in Kingston, Jamaica and won another bronze medal in the 880 yards.

During the 1968 Summer Olympic Games in Mexico, he bagged a silver medal. A year later, he bowed out of active athletics and settled as a fitness instructor in the army until 1974, when he retired from the force.

During the recent Mashujaa Day celebration, Chumo was feted at home with a trophy and cash token by the Kericho county administration.

Area governor Paul Chepkwony paid a glowing tribute to the legend who he said had paved the way for thousands of athletes who have since ruled athletic fields.

“Every generation produces its heroes and heroines and in our time we have many shining stars in athletics who are flying the Kenyan flag high all over the world and it all started with Kiprugut Chumo,” Chepkwony said.

Apart from the 1964 Olympic bronze medal, in 1965, he won two gold medals in the 400 and 800 metre races at the inaugural All African Games held in Brazzaville, Congo, in July.  In 1966, he participated in the Commonwealth Games held in Kingston, Jamaica, and won a bronze medal in the 880 yards.

Two other local athletes Erick Keter and Edwin Soi were feted during the function for placing Kericho County on the map in terms of athletic prowess.

Kenya first participated in the Olympic Games in 1956, and has sent athletes to compete in every Summer Olympic Games except in 1976 and 1980.