How Job Seekers are Being Tricked By Con Artists 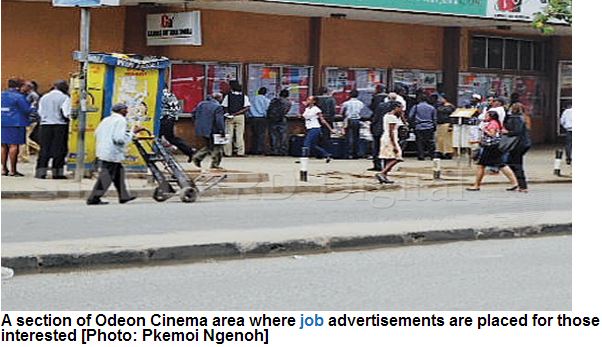 Crafty tricksters are taking advantage of desperation among unemployed youth, making the latter to part with thousands of shillings to secure ghost jobs

A keen observer passing near the Odeon bus terminus will not miss the sight of people jostling for space to get a glimpse of some notice boards stretching all the way to a nearby bank branch.

One can even be fooled to think the crowd of people, mostly the youth and those new in the city, are outdoing each other to watch a free cinema on the wall.

But a closer look reveals that these people are taking contacts from various notices on the wall advertising jobs and vacancies in the city and its environs.

Vacancies appearing on the glass-sealed notice boards range from plum jobs in city offices, Non-Governmental Organisations (NGO) and companies looking for drivers, IT managers and even individuals looking for househelps in leafy suburbs.

Nearly all of them use convincing terms and eye-catching fonts, leaving contacts in form of telephone numbers and e-mail addresses for interested parties to reach the companies and individuals behind the advertisements.

Shockingly, some of the advertisements here are placed by daring cons artists who seem to be out to rob desperate individuals looking for elusive jobs in the city. They manage to advertise on the notice boards around the city since the charges are pocket-friendly.

The advertising company in charge of this particular wall charge Sh400 per week to advertise on A4-size paper, which adds up to Sh1,600 per month.

Another advertising agency managing a notice board on Moi Avenue charges Sh300 per week using A4 size paper, but the largest advert is charged up to Sh2,000 per month, which makes the business easy for those with malicious intentions.

The County Weekly caught up with some victims of the con trick.

Davis, a Kenya Polytechnic University College student says he woke up one morning to try his luck on an advertisement placed in one of the notice boards around Odeon Cinema early last year.

“I was among the first people to arrive on the spot that morning, feeling lucky that I found an advert by an NGO company looking for a driver; which I was interested in and had all the qualifications listed,” he narrates.

Without wasting much time, he says he took e-mail address which was given and dropped his CV that afternoon, eagerly looking forward to a reply.

The reply came in the form of a phone call from a lady who told him to appear for an interview at  an office in one of the oldest buildings along Tom Mboya street.

“Without failure I showed up early for the interview. Before locating the office, I received a call from the same lady again that her boss was waiting for me in a vehicle outside the building to test my driving skills along Jogoo road,” he says.

In a matter of minutes, Davis had fallen into the trap of two con-men and a con-lady, who took off immediately he got into the white saloon car.

That day, he says he had not carried his laptop and they took the Sh2,000 he had, his shoes and jacket before leaving him in Umoja, still in shock and confusion.

“I thought it was just a dream until some people circled me thinking I was insane. I could not even remember their faces or the vehicle’s registration number.  I just trekked all the way to Pipeline, where I resided then after a lesson well learnt.  I did not report the case knowing it was my fault,” he regrets.

Another victim, Mr Kibet says he tried his luck with a recruiting agency he came across on another notice board. The agency had promised some jobs at a local airport.

Upon application, he received a call from a man who told him to deposit Sh5,000.

Desperate to land himself a job at the airport, he says he complied.

The ‘godfather’ was unreachable on his cell phone the moment the money landed in his account. Three months on, Mr Kibet now works as barman in Pipeline.

In a mission to trace those behind such con traps, The County Weekly came across an advertisement on a wall within the city looking for people to work in a supermarket at a building along Lusaka road.  Below it was a whopping Sh20,000 as starting salary and contacts for the link person printed in bold.

When we dialed the number in a bid to inquire about the job, the first thing we heard on the other side was that the ‘godfather’ was to be bribed with Sh5,000, but before this we  to visit the supermarket first.

To our amazement, the phone was disconnected immediately and has since become permanently unreachable.

Others targeted on such traps are ladies looking for work as househelps only to end up in the arms of people not interested in their services but their bodies.

“We advise the public to be cautious when it comes to job applications one comes across on street notice boards,” a senior police officer responded when reached for comment.