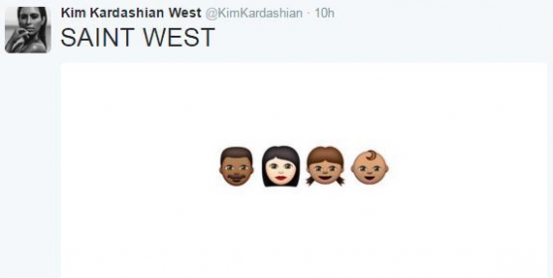 The reality star and her rapper husband have finally revealed the name of their baby boy.

Kim Kardashian and Kanye West have revealed the name of their baby boy.

The KUWTK star welcomed their second child on Saturday December 5, three weeks before her due date, and the couple have revealed they have named the child SAINT West. Nawww.

It's a little bit like Yeezus. We love the name.

The famous pair, who also have two-year-old North West, shared an image on Kim's website today which featured emojis of Kim, Kanye, North and Saint.

A rep wrote on the website on Saturday: "Kim Kardashian West and her husband, Kanye West, welcomed the arrival of their son this morning.

"Mother and son are doing well."

Throughout her pregnancy there has been much speculation regarding the name the couple will pick, after they chose the unusual name North for their daughter.

An insider previously told Mail Online that the couple WILL be calling the baby Easton.

"Easton is the chosen name. It's confirmed that the baby boy will be called Easton," said the source.

However, the couple went on to deny the rumour – and Kim revealed that she WOULDN'T consider calling her baby a quirky match-matchy directional name, like North. Sob.

Kimmy said that she wants the baby to have a "strong" name.