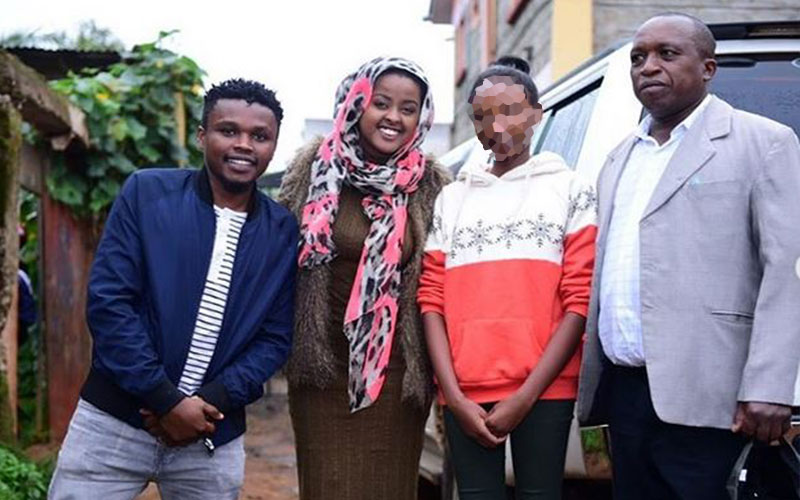 Comedian Chipukeezy and media personalities Janet Mbugua, Amina Abdi and Terryanne Chebet have come to the aid of a high school girl in Karatina who appeared drunk in a viral video a few months ago.

The NACADA director together with The Trends Amina Abdi took a trip to her residence in Karatina to break the good news to her.

Through a post on his Instagram page, Chipukeezy explained that he came to aide of the girl after she contemplated suicide and running away after her video went viral.

“A few months ago a video showing a 15-year-old girl clearly drunk went viral. When she was on the verge of running away from home because of the video, contemplating suicide etc I took it upon myself as a Nacada Director to reach out and offer help where I could. I promised to offer mentor ship, ensure she completes her high school education, receive the much needed guidance and counseling and today, I’m so happy to say she’s doing so much better,” he wrote.

The comedian reached out to former Citizen TV journalists; Janet Mbugua and Terryanne Chebet and NTV's Amina who willingly offered to take care of her school fees for a year each.

“I reached out to my sister @aminaabdirabar who not only joined me and came all the way to Karatina BUT she even offered to pay 1 year of her high school. It inspired me to do the same, I then called @officialjanetmbugua & @terryannechebet who both agreed to help and each paid fees for a year as well. Kindly note that the reason I reached out was not to reward her for drinking, but give her the mentor ship she requires & to highlight the much needed discussion on alcohol affecting our youth across the country,” he concluded.