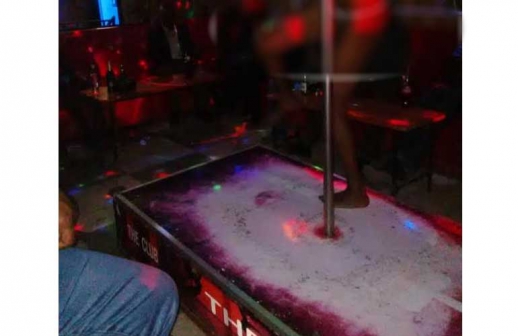 Away from Embakasi, live sex is rampant in various estates.

In Kibera, there are live sex shows on a shoestring budget. You can pay to watch live sex in parts of Makina, Gatwekera and Laini Saba. Here, several video dens ‘broadcast’ live shows for Sh150 as you watch men and young girls have sex.

“Most girls who engage in sex-for-view have babies to feed. They prefer being paid for sex in public than standing in street corners,” says our source.

At times, especially when men are drunk, such viewings get out of hand and some offer up to Sh500. “There can never be a problem with the police... In fact, cops on patrol usually pass by for their share of protection money,” he says.

The entrance fee can be hiked to Sh200 if the girls taking part that night are fresh, youthful and probably underage. In the shows, a female usually has no say as to whether a man should have protection or not.

According to the latest United Nations Population Fund report, one in every 117 females is a sex worker.

The report indicates that an average sex worker earns Sh1,500 per day. Nairobi has the highest concentration of female sex workers at 29,494, while the rest of the country has 107,181 sex workers. This is a four times increase in the number of city prostitutes from three years ago.

In a 2013 report by former Nairobi mayor, Nairobi had 7,000 sex workers operating at night, with each having an average of three to four clients, which translates to between 21,000 and 28,000 sexual activities a night.

The United Nations Population Fund report also claims that three out of every 10 female sex workers in Africa are HIV-positive. The report adds that 76.6 per cent of Kenyans think prostitution should be legalised.

A walk-around Innercore, especially near clubs, one is met with ugly sights of almost women standing on the sidewalks almost naked. The women hunt for men who are going home past 9pm. Kayole is another juggle that has women lining up along the flats for all and sundry.

There is a hooker zone in an area called Mbuthia where langas begin their activities at around 5pm in the evening. The flesh peddlers here are a mix of young and old.

They are now even in Nairobi’s Huruma Estate where two well-known sex joints have girls as young as 12-years-old sleeping with patrons for as low as Sh100.