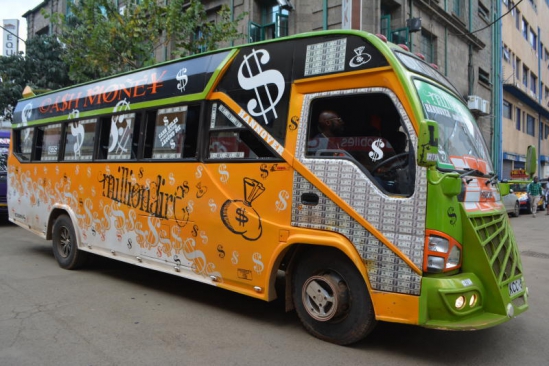 On August 5, more than 45 students both boys and girls from different secondary schools were busted drunk in Nyeri inside a Nairobi bound bus. It is alleged that he flashy nganya known as Millionaire operates under Thika road’s Hannover sacco.

The Nairobian can reveal that the rogue ‘kids’ were frogmarched to Kiangwachi Police Station where they spent Wednesday night in police cells. The other 39 students were allegedly picked up by their school principals who contacted their parents to pick them up.

According to an eye witness, “When that bus made a stopover at Kibirigwi town, the rowdy students who appeared to be smoking shouted obscenities at market vendors. Suspicious women alerted the local boda boda operators who chased the driver demanding an explanation; but he sped off.”

Traffic police at Kiangwaci Police Post intercepted the bus and found rolls of bhang on the floor. School girls were seated on boys’ laps in the back seat and most of the students appeared intoxicated.

Nairobi Traffic Commandant Charlton Mureithi told The Nairobian that, “The 33-seater bus had an excess of seven passengers. Some of the students were drunk and others in possession of bhang.”

Hannover sacco Chairman, Sam Kago has however denied claims that their Millionaire bus was hired by the students and its crew supplied them with alcohol and weed.

“A number of buses usually travel to schools to pick students because they like flashy buses, but that we give them drugs is not true. In fact, the students boarded the bus like any other passengers because we are in business,” adding  that, “So far the bus has been inspected by police and found to be in good condition.”

Since the arrival of Manyangas or ‘pimped’ matatus in early 90’s conductors have undergone a complete makeover.

In a recent interview with The Nairobian, Kim, a Buru-buru conductor said, “Some of these girls fall for our dress code and money and with as little as Sh100 daily for lunch, they will do anything. Kama, another makanga says they test for maturity by, “Poking the girl’s breasts with the elbow and with time, their ‘prey’ gets the hint.”

Kama who pockets Sh3000 every day adds that, “All the money I spend on these college girls is paid back in kind.”

The Nairobian has learnt that in some matatus, front seats are reserved for match-making.  Along the way contacts are exchanged and ‘business’ accomplished in city hotels.