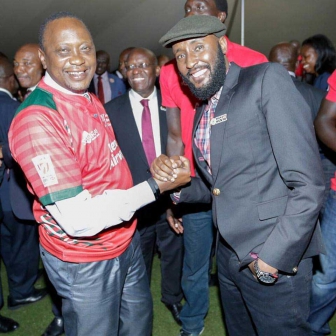 Uhuru Kenyatta is considered the coolest president by young peeps.

If he is not taking selfies with fans or talking in sheng, he could be hosting celebs at State House.

Shafffie revealed exclusively to Heads Up that he and the president had a chat about his beard.

“He told me, ‘Madevu karibu State House’. We had met before he was sworn in and I was clean shaven,” said the controversial radio host.

So did he remember him during their recent meeting now that he spots ‘movember’?

“Of course, the president knows the Raverend,” Shaffie said.

Shaffie is now on Heads Up’s list of friends of the president, including celebs like Jaguar, Sauti Sol and comedian Chipukeezy.

Chipukeezy even asked the president for his daughter Ngina’s hand in marriage during a radio chat in 2014.

When that backfired, he requested him to adopt him.

Of course, all this was on a light note. Sauti Sol not only performed for him during his birthday, but also during US president Barack Obama’s visit to State House.