Kunguru Is Back With A Bang 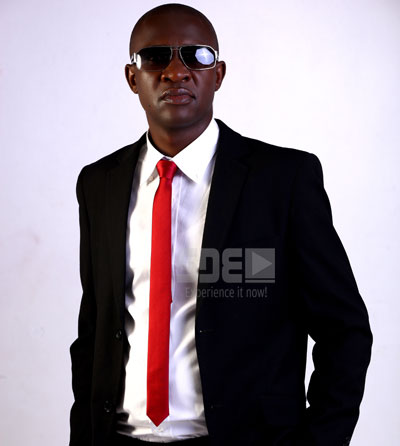 Mostly remembered for his club-banging tunes I will Never Let you Go and Baby Don’t Go, the latter done featuring Mr Lenny, Eric Onguru aka Kunguru, now says he is back.

Donned in a smart fitting black suit, white shirt and a red necktie, this artiste is quite different from the carefree young man of days gone by, coming across instead as the business type.

Indeed Kunguru now works as a bank manager in one of the city’s banks and he attributes his silence to this.

“I have been out of the music scene for that long because I had been focusing on my professional growth,” he explains, adding that a solid professional background is key in meeting one’s personal expectations — a key reason he says made him ensure he went to and cleared his university studies despite the trappings that came with the fame of a then-fledgling music career.

Formerly baptised as a ‘ladies’ man’, which could widely be attributed to his lyrics and style of music, Kunguru says that after many years of soul searching and growth, he decided to come back as a rebranded and a more mature artiste.

He started rapping at a tender age, although his debut in mainstream showbiz was in 2006 when he released African Woman featuring Mr Lenny.

In those five years he has been away from the scene, a lot has changed, including him. His new style of music is more skewed towards entertaining a mature crowd, with a deliberate input of more conscious content and excellent quality, commensurate to this type of audience.

On his new, more mature image, he has no apologies to make, attributing it to personal and social growth.

“I am not sure whether the type of people I associate with lately in both professionally and socially circles would be amused if I pursue the type of music most of the young artistes do today,” he says.

Kunguru, who is now married and a father of two, also posits that his day job in the banking industry has attributed to his new ways of doing things.

“Imagine if one of my customer comes to the bank then notices that I am the same person they spotted with a bevy of beauties, drinking or even dressed informally, doing all manner of things the younger artistes do today. That would be creating a bad image, which I am not ready for,” he says.

After more than five years of missing from the showbiz scene, the singer recently released his latest song titled Superstar, featuring songstress Christine Apondi, and he asserts it is just but a tip of the many works he has lined up.

He describes his latest song as a feel-good song that will cut across both mature audiences and the masses. He is set to drop the video in three weeks.

Kunguru, who still works with the Ogopa Deejays, also revealed that, in the pipeline, he has also worked with artistes such as songstress Iddi Achieng’ with whom they have recorded two songs, vocalist Christine Apondi and rapper Montana.

He also posits that his collabo with Mr Lenny on the song Baby Don’t Go video, which was named the best video of the year Kisima Awards in 2003, marked the advent of quality video production in Kenya.