By Fredrick Kagonye | 3 years ago 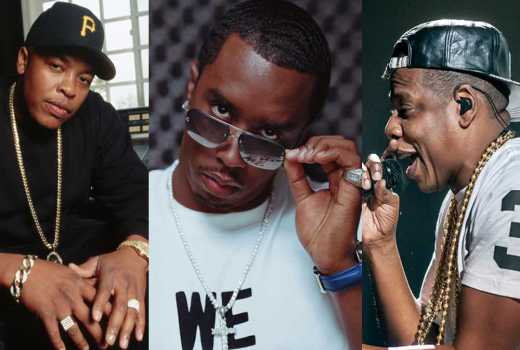 Last week Forbes released its list of richest rappers that features the usual names, this time round, however, there was a change at the top with Birdman falling off the list and getting replaced by Eminem. The top three moguls not only top the list of the wealthiest rappers but are said to be the richest American musicians in any genre.

The main source of cash flow for Diddy and Jay Z is alcoholic brands. Diddy continues to reap from his ten-year association with Ciroc, keeping him at the top of the list of richest entertainers since 2011.

This growth in recent years seems to be slowing down with experts in the alcohol industry in the US saying that the focus is slowly shifting to Cognac, Tequila and whiskey.

This area is where Jay Z seems to have capitalised with his new alcoholic brands Armand de Brignac champagne and D’Ussé Cognac, which many have said will grow in the coming years due to the shift.

The alcohol industry could be the one holding the key to the two moguls hitting the USD1 billion mark.

His jump to the top spot is credited with the rise in the value of alcoholic brands Armand de Brignac champagne and D’Usse’ cognac which take the lion share for his total worth with his record label Roc Nation and Tidal streaming site said to have contributed little to the net worth.

He falls from the top, having held the spot since 2011. His fortune has been growing for the last year or so despite not releasing an album but the earnings have not been enough to retain his ranking at the top.

The slump in the vodka market has affected his earnings and so has the cable TV industry in which he has shares. But his DeLeón tequila brand has been a positive for him with its growth earning him a tidy sum.

The top producer has featured prominently on this list since 2011 but has never earned enough to take the top spot. His cut from the deal with Apple to sell Beats by Dre headphones saw him become the first ever living musician to get the largest pay-day in a single year.

He is set to receive over $100 million from Apple stock. The stock exchange by the time of his payments will determine whether he leapfrogs Diddy and Jay Z to the top spot.

The Canadian rapper became the newest addition to the top five club of the wealthiest musicians in the world last year. He stands as the most streamed artiste in the world.

The rapper is said to have earned a whopping $250 million before spending and taxes from his interests in the whiskey business and real estate.

The debut to the list is credited to the sales of his new album Revival, which also sees a drop by Birdman who is alleged to have liquidity issues.