I was first attracted to my fiancé’s money- Risper Faith

Pulse: We understand that you are shooting for the fifth season of the Nairobi Diaries. Should we expect the drama to go on, especially since you introduced us to your boyfriend Brian Muiruri?

Risper: Brian is not my boyfriend. He is my fiancé. Like you know we actually got engaged a few months ago and we are living together as a couple. What you saw during the Reunion show was real life.
P: How long had you known Brian before the engagement?
R: Three years. Back then he was living in the United States where he was doing business.
P: How did you meet?
R: The funny thing is that he dropped me a line on my inbox, pampering me with all sweet words and promised to come to Nairobi to visit me. I thought that was a joke because I get a lot of that kind of mail. After responding to him two months later, he came over and after meeting, he sounded serious. Back then, I was living in Kiambu and he had to spend a night in my house after which he promised to move me to Kilimani where I now stay.
P: So you decided to go it all the way on the first date?
R: Not really. It took time before we got where we are. I only accepted to let my heart go when he introduced me to his family.
P: So, was it the money, the fame or just his character that you liked?
R: Frankly speaking, at first I was attracted to the money and all that lifestyle thing. Every girl likes that. But with time I got to learn his character and saw him from a different perspective. Brian is a great man who besides the money takes care of me.
P: Is it true that he is the one who bought your first car?
R: Hell no. By the time I met him I already had a ride. We own another one - with him. And he is now getting me a Mercedes Benz.
P: Is that for Valentines?
R: It has nothing to do with Valentines. It’s just a gift.
P: What’s for Valentines?
R: We had that conversation the other day and I am still waiting for the surprise. On Valentines, it’s about a man spoiling his woman and not the other way round so am waiting to see what is in store.
P: How does this relationship work, since, he still travels a lot to the United States?
R: He actually relocated here and besides other stuff he is doing, he is assisting me run my liquor store as well as my lingerie shop.
P: Do we hear wedding bells?
R: The wedding is coming. We have been talking about this and it will probably be held in at the Coast. We have in mind Swahili Beach hotel. However, we have a good residential house coming up in Kitsuru and we can as well hold it there.
P: Now that he is here and that you are in a serious relationship, do you still feel comfortable doing the booty dance in clubs which has been part of your career?
R: I still hold gigs in clubs but not at much as I used to do. Besides, I don’t shake my a** for any man anymore as much as men insist that I do that for them. This is now in the past.
P: Hasn’t this affected your nightlife business?
R: Well, sometimes when I go out for gigs, Brian shows up and it would rather be disrespectable of me shaking booty for other men while he is there or even when I am in full knowledge that I belong to someone else. Much of my focus is now on my business and not the club thing.
P: How is it going on with you teaching models and other clients how to keep in shape, with all the curves in the right places?
R: Let’s get this right; the lingerie I sell are buff lifters and tummy tucks that help a lady’s booty pop and her tummy stay flat. I sell about 1,000 pieces a month. That is all I do with body shape issues. The models I have are purely on contract for beauty and sales business. Besides them, I have six employees running my business.
P: What word do you have for the men who are still hitting on you and still talking about you on the ‘pole dance’?
R: They should know that everything they send on my phone is no secret as I share it all with my fiancé. 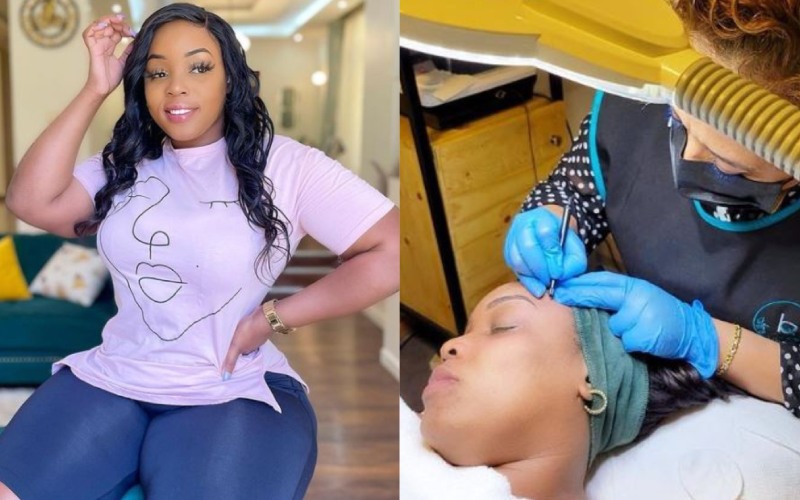