By George Orido | 5 years ago 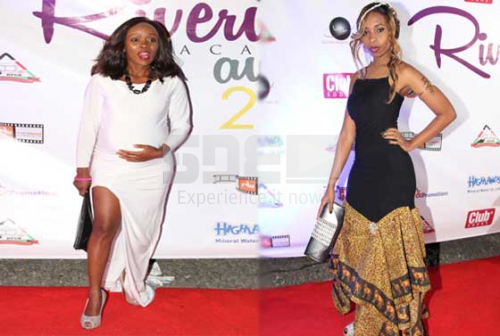 The red carpet was elaborate. It was an African wear affair. While some fused their look with black tie and a more Western look, majority kept the theme real African.

Here at Louis Leakey Auditorium, filmmakers turned up in large numbers for the third edition of the Riverwood Academy Awards during the Saturday event graced by the crème de crème in the movie industry.

Among the guests adorning the red carpet was the fashionista Robert Burale who in a broken suit and a bowtie, killed it as many had a great taste for the veining.

Yet the red carpet was just the beginning of a stretching night where the very best of Kenya’s own silver screen was going to be unveiled in an award ceremony started by the suave Mwaniki Mageria who was the emcee for the night.

“Ours is to showcase the very best of Kenyan films by Kenyans and for the Kenyan audience,” announced Mr Mageria at the start of the programme under the aegis of the revamped Kenya Film Classification Board. He also disclosed that at least 72 entries were received, which is double the number entered last year.

A decade ago, it was very easy to count by ones’ fingers how many producers and how many films were made in the country.

Others are Sam Kariuki, Kang’ethe Mungai, Jared Omondi, Austine Fraculah, Felix Warutere, Muchiri Mentor and Martin Githinji, just but to mention a few. Even with the growth, the conditions for film production in Kenya haven't improved.

In fact, Hollywood producers are opting for South Africa instead of Kenya as a preferred location.

“I have met with government officials on some occasions about government providing incentives but they keep talking of ‘doing something’. We need more tangible and immediate measures to let the Hollywood dollars stream here,” remarked The First Grader star Oliver Litondo who won the highest award at the Living Legend event.

The sponsorship of this year’s awards by the government agency KFCB is yet another good sign that the public sector is serious about working with private players to make the industry big.

Other than Litondo coming out the big winner Samuel Ngunjiri scooped the Best Actor in Film in Confession beating Jacob Otieno in Sibini, Mike Njeru in What Goes Around, Solomon Muingi in Wicked, Gerald Langiri in Happy Anniversary and Likobe in Sokomoko.

“I thank the production team and God the Almighty for this achievement tonight,” said Ngunjiri in his acceptance speech.

The Best Actress in Film went to Jackie Kaboi for Bait. She was soaked in tears of joy after outsmarting Faith King’ola in Confession, Jackie Wahome in Choices, Gift Terry in Ante Dre, Anastasia Mwawasi in Wicked and Lydia Manani in Mad Love.