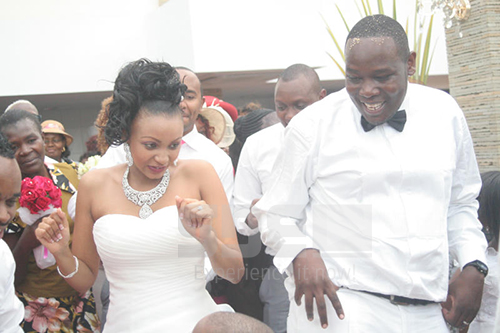 Gospel artistes Rufttone (Roy Smith Mwatia) and his wife Krystal (Susan Njoki) tied the knot in holy matrimony at the Kenya Assemblies of God, Buru Buru, Nairobi on Saturday. Rufftone who hit the airway waves with his hit song ‘Mwikuli’ sometime back and his recent release ‘Mungu Baba Twaomba’ where he featured GSUs in his song and video, married his longtime girlfriend Krystal who is also a gospel singer.

The wedding ceremony was a simple but perfect with a fairly slim guest list. The church service was held at the Kenya Assemblies of God in Buruburu and later reception at the Prestigious Boma Hotel, South C, Nairobi.

Present at the event were Nameless and his wife Wahu, Kevin Mulei and his wife Janet, Ole Willy who was one of the coordinators, Bahati, Esther Wahome, Dunco, Dj Soxxy, Jimmy Gait who performed his hit song ‘Signature’ soon after the couple signed their marriage certificates at the Church, among many other invited guests. Rufftone also performed his song ‘Bye to single hood’ at the church.

Daddy Owen’s sweetheart Farida Wambui was also present, maybe to prepare herself too for their ‘big day’

Conspicuously missing but invited were Kenzo and Jaguar.

The bridal party was the grooms parents Josephat Mwatia and Margaret Mwatia,