Randy male world: Are all men polygamous by nature?

By Mike Mswati
1 year ago

After a Nairobi MCA, complete with a child to prove it, crawled out of the woodwork, claiming to be the secret wife of the late Kibra MP Ken Okoth, polygamy has been the talk of town.

Could it be that men are instinctively polygamous and cannot be satisfied by one woman due to their deep-rooted appetite for variety?

Apparently, monogamy is a social construct, and even men in such unions are always itching to have more children. So much so that it’s their women who have to bother about family planning most of the time.

While giving the example of former South Africa president Jacob Zuma, the late Njenga Karume, among many others, who continued to make babies well past their 75th birthdays, Biologist Eric Oduor insists men are polygamous by nature.

“Put differently, men are able to sire children for over seven decades. Contrast this with the women who, in their late teens, are advised not to be in a hurry to get children. In today’s world where most women go to school and get employed, it means that they have to wait until they are at least 25 years old to start a family- assuming they have a man,” he says.

He goes on to add that by the time they go past their mid-30s given lifestyle diseases, career advancement and work-related stress, many are advised not to conceive anymore for health reasons.

“Then menopause sets in, meaning that in essence, a 21st Century woman has about 15 years of reproductive health- translating, at best, to about five children,” he argues.

So, why would nature equip a man with more than twice the number of reproductive years as that of a woman if the intention were for a man to stay with one woman for his entire life?

“There is nothing natural about monogamy. In the animal kingdom, very few species are monogamous. Even those that live together socially are not sexually exclusive,” Leon Mburu, a zoology student, says.

Monogamy is practised for various reasons. In today’s world, the social reasons rank high with the need for a couple to come together and pool their resources to support their offspring. Marital union also offers a basic unit- the family- that is considered the building block of a stable society.

This portends the practice of sexual exclusivity among partners and, by and large, the perpetuation of their offspring in a more secure world. It is easier to provide education, medical cover, shelter and other basics in such an arrangement.

Religion has also played a role. “Being able to commit to one woman for your entire married life is the ultimate confirmation of a man’s maturity and sense of responsibility,” says Ken Muli, who has been married for two years. He is also staunch in his religious belief, which decrees that he only marries one wife.

Not that religion has not had its fair share of polygamous unions. The wise King Solomon is quoted to have been ‘blessed’ with 700 wives and 300 concubines, including foreign princesses such as Pharaoh’s daughter and women of Moab, Ammon, Sidon and of the Hittites.

Earlier, when Biblical Sarah saw that she could not bear a child for Abraham, she persuaded him to sleep with Hagar, her maidservant. Sarah and Abraham would go on to be the parents of the nation of Israel in the scriptures.

Edwin, a divorcee in his early 40s, believes that what we have now is ‘monogamy plagued by wanton acts of adultery’, quoting the many incidences that are the fodder of radio talk shows.

He mentions cases of married women going on and on about their detached absentee husbands and how that gap has since been filled by ‘toyboys’ and, conversely, men recounting their escapades with their ‘clandes’, away from their ‘nagging’ spouses.

In an individualistic world where divorce is easier to get, Edwin contends that a man who has married two or three times is no different from his ancestor who had three wives. This practice of having just one mate at a time or ‘serial monogamy’, where you marry, divorce and remarry is a more common practice.

“In those days, people worked on their misunderstandings, so walking away from your spouse was almost unheard of. Marriage appealed to higher social ideals, not the selfish ‘soap opera’ kind of unrealistic love that we regard so highly. If you fancied a girl you brought her home to be your second wife, so long as you could provide for the entire household,” he offers.

That ability to provide is the cornerstone of marriage. It would be foolhardy to have two wives if you cannot provide for one. 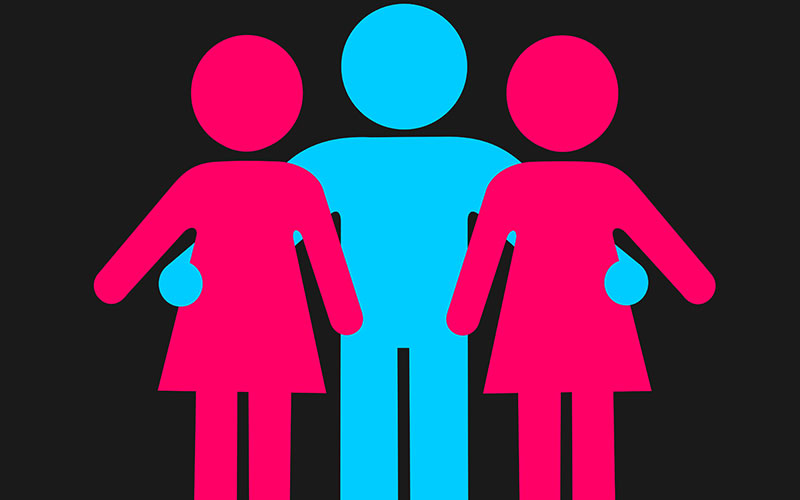 Monica, a fresh graduate who says she will never get married, herself points out that she sees nothing wrong with polygamy so long as the man in question is a ‘real’ man.

“The problem is, most of these jokers jumping from one wife to another cannot even provide for or satisfy one woman. You surely cannot expect your wife to be okay with you getting a second wife when you do not meet her physical, emotional and material needs,” she says.

Ahmed Atute Mire sees nothing wrong with polygamy, adding that it is good for a man to have variety.

He believes that much as there is nothing wrong with being faithful to one woman, it is not possible to be faithful, terming it ‘unrealistic’, the reason polygamy ought to be accommodated.

“Why cheat on your wife when you can do things legally? We are African, my friend, and we have always been polygamous,” he says.

His religion also allows him to have more than one wife, a point he attributes to the realisation that man will need more than one wife and that it is wrong to commit adultery. But Njoki, a young single banker says that’s rubbish: “I can’t be a first or second wife. I can only be ‘the’ wife. I would rather have him cheat clandestinely than know he is with another woman. It would make me feel inadequate — like I can’t satisfy him....”

There it is. Deep down, Njoki knows that her man will likely at some point want another woman.

Interesting to note also that some women have accepted this reality and are ‘moving on’.

Many argue that they would rather know who their husband is sleeping with, and accept her as a co-wife, instead of him sticking his joystick in anything in a skirt without knowing its background. And for some women, polygamy serves a more practical purpose.

“Back in my native Bumula village in Bungoma, women support polygamy as a way of reducing housework. Chores such as cooking and fetching water in large homesteads become lighter when more than one woman is taking care of them,” Nanjala explains.

Some women do not mind if their husband brings home a co-wife, even if the co-wife is their blood relative, even their sister, as is the case of Ugandan Patrick Oburu whose story trended on social media a while back.

He has 61 children and 12 wives, most of them sisters. He says that when he married the first woman, his in-laws gave him another one as a way of saying “thank you for treating our daughter well”. Mr Oburu lives under the same roof with his 12 wives and they all claim to be very happy.