Doomed Raphael Tuju about to sink and drown

By Peter Wanyonyi | 2 years ago 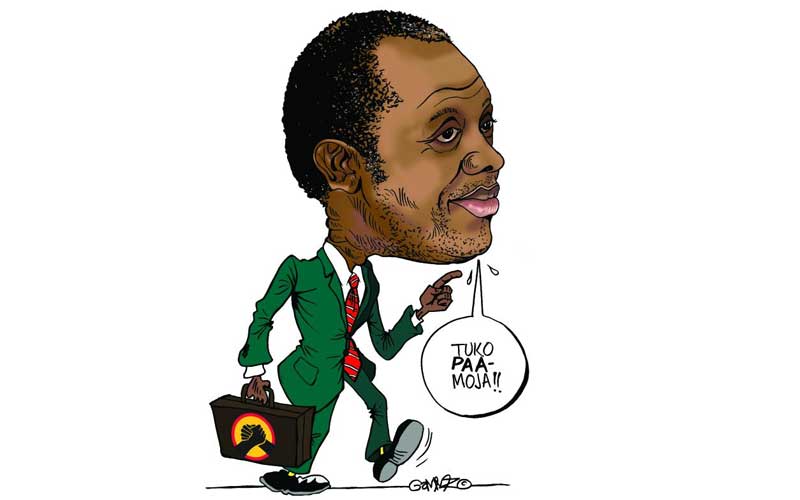 There is only one ship that matters in Kenya’s political waters, and that is the ‘Marine Vessel Handshake’. Launched with great fanfare by President Uhuru and his arch-nemesis Tinga Agwambo, MV Handshake has delayed lifting anchor. All this is because of an unseemly infighting on its main deck: The Captain, Uhuru, no longer sees eye to eye with his deputy.

There are disturbing rumours that the deputy might be tossed overboard before the ship sets sail for 2022 or, even worse, that the ship might be sailed into deep waters and then the deputy forced to walk the plank, so to speak, to his political doom.

This whole drama has been masterminded by the formidable Raphael Tuju, Nyanza’s own political phoenix, the man with nine political lives.

Just when you think he is out, he shocks you by rising up and somehow beating the count.

But his fortunes, it appears, are dwindling. Tuju made his name as the Uhuru point-man in Luo Nyanza at a time when being associated with the President anywhere west of Nakuru was a guaranteed political – and in some cases actual physical – suicide.

But he stuck to his political guns and was rewarded with big things: he became the Jubilee boss, and has played a significant role in shaping the President’s party and the Presidency.

But Kenyan politics has its owners, and Mr Tuju is not one of them. His role in Jubilee brought him into direct conflict with Deputy President Ruto’s faction of the ruling party, a conflict that was made worse by Raila barging into the ruling party’s bedroom rudely.

What was previously a loving but occasionally fighting couple in Uhuru and Ruto suddenly became a three-some – and, as any gigolo will tell you, two is company but three is a crowd.

There isn’t enough room in the Jubilee bedroom for three lovers, let alone three lovers plus a hanger-on in Tuju.

Raila Odinga is manoeuvring to be crowned heir to Uhuru in 2022 any which way – via a referendum that gives him his treasured Prime Minister position back, via an Uhuru endorsement or via a dethroning of Ruto, any way will do.

Tuju is instrumental in selling this plan to Central Kenya, where Raila is probably the second-most-disliked person, just behind Ruto – who, to central Kenya voters, is more or less the devil himself.

Tuju is also a former enemy of Raila, and has said some nasty things about Tinga in years gone by. It follows, then, that Tuju’s goose is cooked whatever happens with Raila’s Central Kenya adventures. If Raila is anointed Uhuru’s successor, the likes of Orengo and other Raila acolytes will swiftly move in to surround their man and ensure that old enemies like Tuju are left twisting in the wind.

If Raila’s Central Kenya adventure ends in failure, there is every chance that Ruto or governor Waiguru ends up president in 2022 – and Tuju would then be fried on live coals.

And so, as MV Handshake looks to lift anchor and sail away, spare a thought for the man who has tried so hard to make it all work, but who looks certain to be jettisoned as ‘mzigo’ excess once out of sight of the shore.