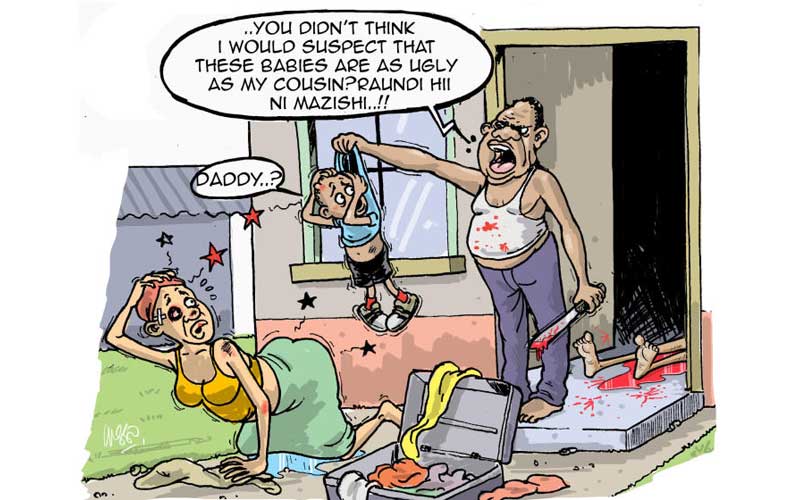 What do you do when you realize your two children closely resembles one of your cousin who once lived in your house?

Well, a man from Makwasinyi village in Voi, Taita Taveta County was enraged that his three-years-old and four-years-old sons closely resemble his cousin.

So furious and embarrassed was the man, surnamed Mwashumbe, that he last Friday night stabbed to death his cousin, identified as Ndegwa Kacumburu on suspicion that he fathered the two children.

The shocking incident happened at Caltex area along Nairobi-Mombasa Highway, where the 38-years-old suspect had lured the 24-years-old victim, under the guise of “discussing vital family matters”.

Confirming the incident, County Police Commander (CPC), Said Kiprotich, said police had launched a manhunt for the killer who vanished after committing the crime.

Kiprotich said the victim died on the spot after the stabs through the heart and left hand.

“We are following some leads to get this man. We will definitely catch up with him,” Kiprotich said.

Police reports say Ndegwa left his place of work in Voi town at around 7: 30 in the evening accompanied by the suspect.

The two allegedly walked towards Caltex while arguing loudly following which the young man was murdered.

A source at Makwasinyi says that in 2015, the suspect had invited his young cousin to live at his home in the village. The suspect used to travel from home frequently leaving his cousin with his wife.

After the cousin sat for his KCSE, he left the village for Voi town to find work.

It was then that rumours started that the suspect’s two children resembled his cousin who had been living at his home for over two years.

“I think he took the rumours seriously. He went looking for his cousin and killed him,” said the source.

The police further took the suspect’s wife in protective custody after preliminary investigations revealed that she was also a potential target for murder by her husband.

The body was taken to Moi County Referral Hospital in Voi town awaiting post-mortem. The CPC further urged members of public to volunteer information about the whereabouts of the suspect who will be arraigned in court once arrested.

“We call upon the public to inform us once they see this suspect. He is a danger to the community,” he said.