Emotional drunk: Seven types of drunks you will find at Kenyan watering holes 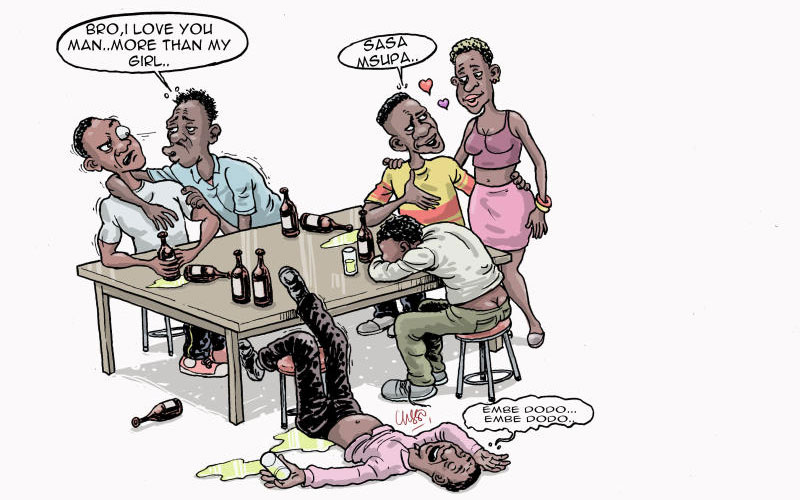 Apart from making your tongue and bladder loose, alcohol also reveals a side of you that you don’t ordinarily show when sober. In a bar or a club, you are bound to find different kinds of drunks.

The emotional drunk is one. Once the alcohol has settled in his heart he will become sensitive and sentimental. He will hug you affectionately and weep as he tells you how much he loves and respects you because you go way back.

He will be reminiscent about the good times you’ve shared, real and imagined, and cry about the day you helped him out of a tight spot.

He’ll put his arm heavily over your shoulder, almost breaking your neck, and swear his undying loyalty to you as a dear friend.

Other times, the emotional drunk will spend most of the night sobbing and lamenting about his deep, painful love for a woman he’s done everything for.

The violent drunk is another one. This one thinks he’s Mike Tyson after a few frothy beverages and just wants to fight. He is full of anger and his fists are always ready to take out his frustrations on anyone.

He will threaten to beat the waiter, the manager and the bouncer. He will tell them he’s not afraid of them and ask them if they know who the he is.

He’ll insult you for simply looking at him and ask you if you have a problem with him. Some of his embarrassed companions will try to calm him down and others will pretend they don’t know him. He has broken many glasses and bottles and has been kicked out of many pubs because of his brawls.

The womanising drunk on the other hand has only one purpose – to seduce women and take one or two home for the night.

For this agenda he will dress to impress and wear too much perfume. He is confident that he’s handsome and charming. He pretends to have more money than he actually has.

He takes his drinks while darting his eyes around looking for a potential mate and is always on his phone texting his exes and other possible lovers for the night.

He’ll prowl the bar drunkenly and approach every woman he can, not to buy or pay for her drink, but to see if they can “have a conversation that could lead somewhere”. Somewhere being his bed.

The womanising drunk has one or two baby mamas and a few Facebook girlfriends.

The party animal’s main aim is to drink and have a good time. He talks to everyone and knows almost every bar in town.

Since he is an alcohol sponge, he drinks more than anyone else and will take a continuous sip of his beer like he’s shooting a soda ad.

He always asks for shots and encourages you to also indulge unashamedly. He will drink until he sleeps on the table and has often been the last one to leave the bar. Every song that plays is his favourite and he will dance while holding his beer. He has lost his phone on more than one occasion and has been arrested together with other drunk (and disorderly) people several times. He always has a hangover.

The parrot is that drunk who becomes noisy once the alcohol has gotten to his mouth. He will not talk in a low voice. He is belligerent and thinks he knows everything. He always has something to say about everything and will argue with anyone about anything. He will loudly interrupt you with another argument before you are done speaking, making other people think you’re having a quarrel.

He likes speaking in English and keeps referring to his job title or academic qualifications to prove his point. He is the one who shouts out loud for the waiter to serve him and tries to explain everything on the news to his common friends in a lawyer-ish demeanour.

Unlike the loud-mouthed drunk, the quiet drunk never says much. He drinks quietly without participating in the ongoing conversations at the table, save for the occasional nod and grunt. He will look as if he is about to pass out but he is very much awake, listening to your ramblings while seeming to be lost in his drunken stupor. He likes the corner seat and avoids those rounds of shots sponsored by the party animal.

Meanwhile, the smart drunk is serious and contemplative after his third bottle. Like a professor, he will start pondering the meaning of life and the purpose of death. He will quote philosophical statements about human nature and taxes. His grim conversations usually die fast because everyone else is too drunk to follow. He is the first at his table leave the bar.