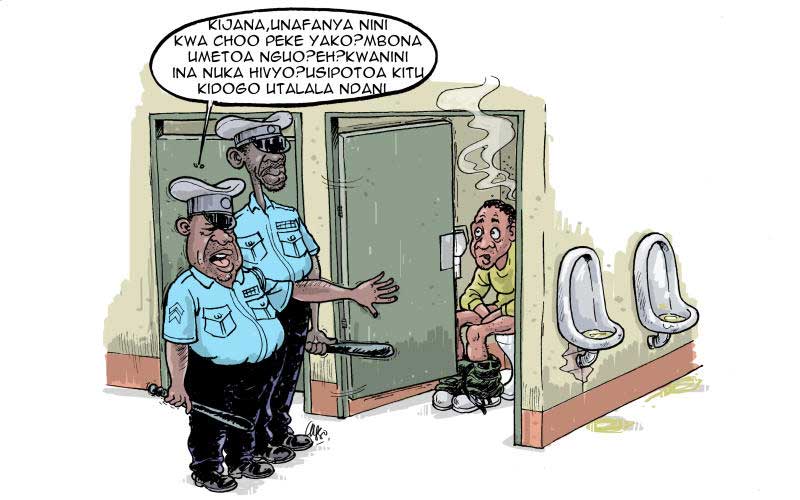 Just like myself, most of our afandes love asking for, and taking, bribes. However, what sets me apart from them and makes me a more successful criminal is that they do not know how to ask for those bribes. With their long-spanning career in extortion, one would expect that those dirty skills have sharpened overtime, becoming worse yet smoother.

But unlike their other colleagues-some pastors; human banks who will ask you to give them God something (because they collect money on his behalf), and will talk you into it in a microphone while ushers pass around the offering bags, until they make you feel like you could even donate your kidney to this God - our faithful law enforcers, on the other hand, will ask for ‘something small’ in a way that will make you never ever want to even consider it.

For instance, after spotting a victim who looks like they could sponsor lunch and some airtime, and then circling in on them, they will begin harassing them using questions. And no, they will not torment the well-known professional thieves who poorly disguise themselves in ill-fitting designer suits and ‘honorable’ titles.

They have a strong preference for the mwananchi who’s just trying to mind their own damn business. You may be in the middle of emptying your bowels in a public toilet while clutching a piece of tissue in a fist, but an officer on duty, using the next stall, will still ask you what you are doing. Why you are doing it, where you are doing it, whether you know that it’s wrong, and what it is that you have in your pockets.

But they will not just ask; the questions will be fired at you one after the other, before you’re done answering any one of them, making you stammer in confusion.

And they will not just fire the questions; they will do it in the most arrogant and accusing tone they can muster, while glaring at you, as if they just caught you pants down in a lodging eating something that belongs to them, something that they had been longingly looking forward to eating when they got home.

After honestly remarking on the foul stench of your waste, and giving you a very small window of time to barely wipe yourself and explain why you are performing a natural bodily function in a public toilet at daytime, they will decide to end that meaningless back-and-forth by asking you to give them some money so that they can let you go.

But they will not just ask- they will rudely demand for a share of it as if it’s rightfully theirs, and you should give it joyously, as if it’s your duty. Should you hesitate, they may suggest taking you to court for an imaginary offence as an alternative.

You may try to stand up for yourself, but because of their poor communication skills (they will keep interrupting before you even finish uttering the first word) the conversation may quickly become a quarrel – and you are a fool if you decide to engage in an argument with them.

In fact, by the time you are done earnestly arguing out your obvious innocence, a small crowd has gathered, and you are likely to find yourself being led ndani by a cop in a navy-blue, nylon kabuti, who is happily laughing about something with their colleague(s) behind a desk.

If you are unmoved by their threats, they might loosen their grip on your waistband, and perhaps even start bargaining on the amount of the ‘fine’, while trying to make you understand that they are doing you a big favour.

They might also be kind enough to give you a few seconds to make up your mind, and they will wait impatiently while looking about, as if they are checking to see if someone can hear them, and then having a stern monologue about your nonexistent misdemeanour.

If they smell that you are a coward, they might intimidate you further by asking you to stand (or park) aside first, as though yours is a really big case, and then proceed to completely ignore you for a while as they decide on your sad fate.

You are in for it if the officers are two, for that committed pair of wrongly-uniformed inmates will assist each other in ‘showing’ you, and you’ll know you’re out of luck when passers-by start looking at you pitifully because you look as if you’re about to lala ndani.