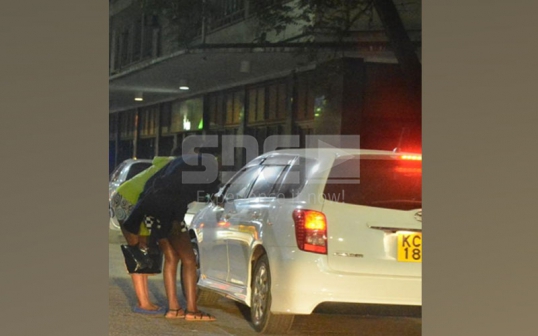 There was free-for-all drama at an entertainment joint in Nairobi mid last week after a man bust his wife working there as a prostitute.

Brimming over with emotions, the man confronted her. A protracted verbal combat ensued, with both trading accusations.

The management of the establishment threw them out on the street where the man attacked his wife, attracting a crowd of curious onlookers.

Speaking in Swahili, an eyewitness identified as Mbogo said: “It was until passers-by tried to intervene and separate the two that the man spoke out.

He defended his actions, explaining that the woman was his wife and he had caught her working as a prostitute.”

Mbogo, a handcart pusher, said the two popped out of the entertainment joint, pulling and tugging, amid wild screams from the woman.

“Bouncers had thrown them out of the club and they continued fighting on the street, with the man expressing his disgust by physically attacking and calling her names,” said Mbogo.

The visibly angry man shouted to onlookers who had milled the incident, explaining to them why he was beating up his wife.

The man is said to have consistently referred to her as a shameless prostitute, nasty as it sounds in Swahili.

As the name-calling went on, entertained onlookers laughed off their heads and cheered them on to fight.

The two were separated by members of the public after the fight and insults become too much.

The woman melted in darkness, leaving the man explaining to the crowd what had transpired prior to the fight.

Apparently the man is a freelance electrical technician and the couple has been having financial problems for a while.

The woman was a housewife and the family solely relied on the man’s salary, which wasn’t sufficient.

But almost two years ago, the man, a father of two, got reprieve from the burden of fending for his family after his wife come home one evening with good news.

She has gotten a job as a waiter at a city restaurant.

That the job entailed her working on the night shift most of them didn’t bother her husband.

“She was at home most of the time during the day and worked at night.

But the mere fact that she participated in putting food on the table never gave me any reason to worry,” the man is said to have told the onlookers.

For close to two years, the woman is believed to have been practicing prostitution without her husband being as wiser.

On this particular day, the man was in the company of a friend at the downtown bar, heavily patronized by women of the night.

On his way to the urinals, the friend spotted the victim’s wife lined up along a corridor where women of easy virtue solicit for sex from patrons.

The shocked friend tipped the man and he made a beeline for the urinals.

A confrontation between the couple ensured and quickly spiralled into a fight before bouncers kicked the duo out of the entertainment joint.

The fate of the marriage is not known since the two didn’t leave the scene together.

“The woman vanished in darkness, leaving her husband pouring out his heart to the crowd of onlookers on the street,” Mbogo concluded.

By Michael Saitoti And Yvonne Chepkwony 18h ago
One killed, five injured as herders clash over pasture