By Crazy Monday Reporter
3 years ago 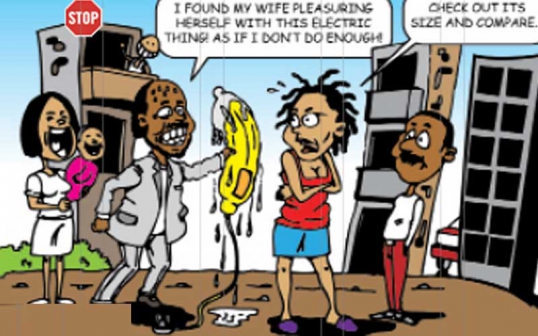 Residents of an apartment block in Kileleshwa, Nairobi were recently treated to drama after a man busted his live-in girlfriend pleasuring herself with a sex toy.

The man, whose profession was only revealed as a ‘businessman’, returned home unexpected slightly past midday after he forgot important documents he was to use to transact business.

Upon arrival, he used an extra key to access the house without notifying his girlfriend, only identified as Tamika, who has been playing housewife.

Just when he walked into his living room, strange loud noises emanating from his bedroom shocked him. So much so that he thought another man had raided his ‘kraal’ and was having ‘amorous congress’ with his girlfriend.

The distressed man armed himself with a stool and burst through the door, ready to face off with the offending Trojan, only to stumble upon his girlfriend pleasuring herself with a humongous adult toy.

The woman, in a fit of self-righteous rage, wrapped herself in a shawl and went to sulk on the balcony. Her angry boyfriend followed her and hurled some unkind words.

He rained insults upon her, rather loudly, attracting the attention of the watchman and curious housegirls within the apartment block.

“What are you foolish woman doing? I work hard to make you comfortable and all you do is play with that huge toy and make noise here...” yelled the man, as the thoroughly entertained onlookers burst into rapturous laughter.

The brouhaha degenerated into a shouting match with the two love birds disgracing each other. “How could you buy such a thing and use it in my house, ehh? Don’t I satisfy you?” the man hissed as he threw the vibrating gadget in the parking lot.

“Get out! Go back to your mother to teach you manners,” the man added. The woman would not take this lying down, and interjected and sarcastically asked him, “So you think you are a man, heh? You are such a useless thing”.

She went on to shame the man by shouting about how “small” and “useless” the man is between the sheets. And how the man has been unable to put her in the family way.

The woman grabbed some of her stuff, thrust it into a small suitcase and left in a huff.

“That serves her right. She was a very naughty woman. How can she ‘replace’ her man with a toy? That will serve as a lesson to all the women who secretly use such things behind their husbands’ back.”

“If mzee has a problem you should tell him, not find a gadget to compete with him,” one of the housegirls was overheard taunting the receding woman as the rest discussed the juicy incident in hushed tones.

Hawkers agony: How my sweet words wooed a reluctant customer
2 years ago