By Oyunga Pala
3 years ago

Live TV debates for political office aspirants are becoming standard fare in the election cycle. Kenyans want to know what their leaders sound like and whether they can stand up to personal scrutiny required of public office.

So when the candidates for the governor position lined up last week for a debate organised by KTN News, Nairobi was watching.

Debates are a space to toot one’s horn for all to hear. They allow observers to look for signals of high status within the male group, and for the debaters to demonstrate strength, courage and competence.

Common wisdom states that debates rarely sway the audience from their preferred choice but in a country like Kenya, they provide the closest thing to a level playing field for aspirants who lack the clout to enjoy dedicated media coverage.

The one off TV debate is a rare opportunity for the invisible ones, to be seen and heard.

During the 2013 presidential debate, the break out star was Abduba Dida. He was an unknown former high school teacher and polygamist who had the audacity to aspire for presidency with no wealth to talk of.

What made Dida memorable was his courage, his unfiltered truth and his plain manner of speaking.

In the Nairobi governors’ debate, Miguna Miguna seemed to have enjoyed that Dida-esque underdog appeal gauging by the response of the audience.

Miguna has built a reputation as a rabble-rouser and a brazen speaker with an outsider status. He is playing in an arena where politicians of his nature are the exception.

Kenyans have a very low tolerance for politicians who do not appear to be rich or enjoy some level of godfather patronage.

No one even knows what car Miguna drives and the only sense of prosperity he lays any claim to is a law firm in Toronto.

But his intellect is respected and his grasp of real politic issues has afforded him some level of notoriety in a space where it is not smart business to operate outside the status quo.

What Miguna lacks in decorum and charisma, he makes up for in damning arguments against his opponents that resonate with a public resigned to the lip service paid to integrity in our politics.

Miguna waved his integrity badge like a pride flag and calls out the credibility of his opponents with the authority of an exorcist.

The simplicity of Miguna’s message makes it easier for people to connect with his truth. But the unvarnished truth sounds like hate speech in an election where political correctness has all politicians speaking out of the corner of their mouths.

In Kenyan politics, dominance and aggression is what gets one noticed. Sonko was the poster child of that brand of politics, typical of Nairobi that has always preferred the rough and tumble tussle in the dirt.

But on this debate night, Sonko with his clean cut suit and trim fresh hair cut looked like part of an establishment that he had built a career distancing himself from.

He no longer enjoyed the underdog status or the distinct sheen of an outsider. Though still immensely popular, he could no longer claim the innocence of a newbie.

In fact standing between Peter Kenneth and Evans Kidero, he displayed the eagerness of a wannabe trying to keep up with the Joneses.

He was well behaved (by Sonko standards) and played by the rules and in essence blunting his edge. Peter Kenneth and Evans Kidero represent the urbane, corporate face of Nairobi politics where leadership beckons men who have amassed significant personal fortunes.

Miguna’s outsider and independence status granted him the license to give everyone hell armed with nothing other than principle.

Contrasted against Sonko, Peter Kenneth and Kidero, Miguna is a man of modest means, which in our politics is a liability. Cashed up candidates present a level of predictability and familiarity.

While they may demonstrate individual charisma and courage, their competence is measured by a past record of accumulation as opposed to integrity.

Success and status is weighed in material terms. Lodged deep in the Kenyan psyche is the idea that political power is a conduit for accumulation.

Integrity and selfless community service does not translate as well as hard cash. A man may earn admiration for his solid character and principles but to qualify for leadership he will need to rain some cash on his fans, if he wants to be taken seriously.

Men like Miguna, Abduba Dida, Okiya Omtatah, Boniface Mwangi, Mohammed Ali are such odd balls in an environment of self serving aspirations.

They are labelled idealistic, naive and broke for pontificating over the value of integrity. Our culture of organised lying has reduced men who are not afraid to voice their truth, to entertaining spectacles ridiculed for bragging about their integrity.

In Kenyan politics, the principle of the devil you know still trumps the angel you do not know. 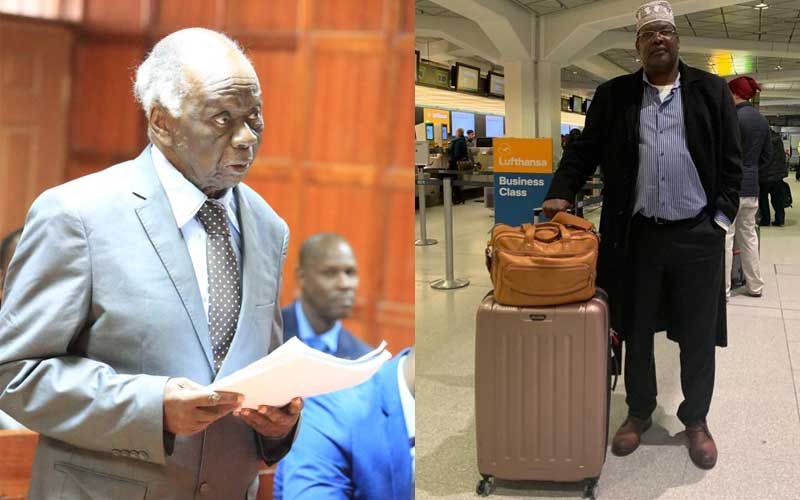 Who is fooling who? State tells court it's unaware of Miguna's failed return
9 months ago